Share on Facebook Follow on Facebook Add to Google+ Connect on Linked in Subscribe by Email Print This Post
Kabuto Noodles, a food brand launching its first marketing activity, has bravely staged the world’s first live improvised ad break to get the cut-through required to succeed in a competitive market.
Kabuto is an upmarket noodle snack bridging the gap between good quality, healthy Asian food and instant noodles found in supermarkets. The brand was founded by Crispin Busk in 2011.

Kabuto Noodles partnered with Viacom Media to secure ad space on Comedy Central to air the live improvised ad and worked with 18 Feet & Rising to create a unique and exciting concept for a TV ad that would make its launch memorable and create a buzz for the brand.

On Monday, June 17th, live on prime time Comedy Central to 1million viewers, four comedians were presented with a pot of Kabuto Noodles, and given an entire ad break to improvise comedy skits, using the pot as a prop.

With comedian host Rob Carter hosting the proceedings, the comedians, from improv group Mischief Theatre, improvised comedy skits live on television and in front of a studio audience. 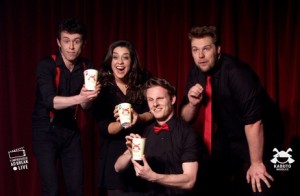 The live three-minute TV ad, directed by live broadcast director James Russell, aired at 9.10pm on Monday night on Comedy Central. It will be followed by 30-second cut-downs of the ad featuring individual skits.

Crispin Busk, Founder Kabuto Noodles said: “We took a risk leaving our jobs to create something new and now we’re taking a risk with our first TV ad. We always wanted to do things that were fun and different so we’re really excited.”

Jonathan Trimble, CEO of 18 Feet & Rising, said: “Kabuto are about the tastiest noodles you can make in a moment – so trying to make an advert happen live in the same amount of time has proved hair-raising with all credit to the team at Kabuto for having the balls to go for it.”

Peter Dale, Business Development Manager for BeViacom and Comedy Central said: “More so now than ever, it’s essential for a brand’s message to stand out from the crowd. This idea brings together a daring brand alongside Comedy Central’s heritage in stand-up, to create an innovative partnership for the live advert and beyond”.

Kabuto Noodles is stocked in Waitrose, Sainsbury’s, Ocado and independents across the UK. In addition Kabuto exports its products to Ireland, Holland, Germany & Russia.

It has grown from 100K in the first year to 750K in 2012, and is set to continue its growth with the introduction of marketing support throughout 2013.