By Newsroom on June 24, 2014Comments Off on Kellogg’s Unveils Protein & Grain Combinations At First-Ever Recharge Bar 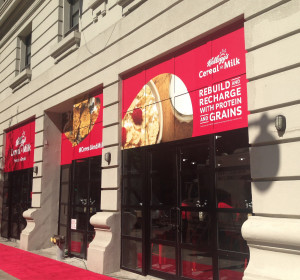 June 23 marked the grand opening of the Kellogg’s Recharge Bar to educate families about the power of protein and grains found in a serving of Kellogg’s cereal and one cup of skim milk – America’s #1 breakfast. When it comes to nutrition at breakfast, there’s a lot of information out there and a recent survey revealed that when hearing “protein and grains,” only 20 percent1 of Americans think of cereal and milk.

“I’m excited to be a part of the opening of Kellogg’s Recharge Bar to show everyone how easy it is to get a nutritious breakfast with a bowl of cereal and milk,” said Emmy-award nominated physician Dr. Travis Stork. “A bowl of cereal and one cup of milk is a great way to start the day with the right combination of protein and whole grains.”

Located at 1701 Broadway Avenue, on W 54th Street and Broadway, the Kellogg’s Recharge Bar will be open to the public for free June 24-27, from 7 a.m. to 2 p.m. daily. Attendees can enjoy a free breakfast of Kellogg’s new cereal and milk combinations, alongside exciting performances from top celebrities. Seating is limited, so those arriving will be granted access on a first come, first serve basis.

While enjoying a Tosi-created protein and grain combination, or mixing their own customizable mix of Kellogg’s cereal and milk, visitors can experience performances from the following celebrities throughout the week: