By Newsroom on March 24, 2017Comments Off on KFC and Ogilvy Sydney Tell a Tale of Two Mates and a Creepy Cat

Running for the next four weeks, the campaign aims to remind KFC lovers that the new special release burger (which combines two KFC fan favourites – the Original Recipe Burger and the ‘Stacker’ concept) is simply “The Chicken You Love, In a Bun”.

Shaun Branagan, group creative director, Ogilvy Sydney said: “When everyone – even the creepy cat next door- wants to get their paws on a KFC Original Stacker, then things go from good to bad to ugly.” 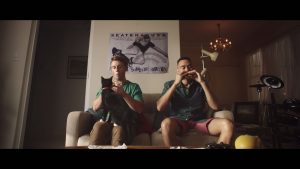 Branagan said the film features two mates devouring their burgers in their living room, who then notice a cat from across the road get closer and closer, before eventually landing on one of the mates’ laps looking longingly up at the burger. How did he get there? “No-one knows…….,” said Branagan.

Outdoor Posters and digital placements will also provide the perfect opportunity to show the Original Recipe Stacker in all its delicious glory, also utilising with the campaign position of “The Chicken You Love, In a Bun”.

Annabel Fribence, marketing director, individual meals at KFC said: “This campaign is all about desire and crave. Original Recipe is our signature finger lickin’ good chicken. With two stacked Original Recipe fillets we had no choice but to celebrate the undeniable desire this burger elicits. No one, man, woman or cat can escape it.” 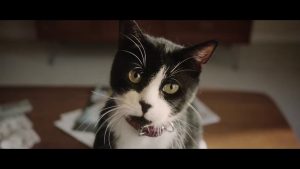 KFC and Ogilvy Sydney Tell a Tale of Two Mates and a Creepy Cat added by Newsroom on March 24, 2017
View all posts by Newsroom →