By Newsroom on May 9, 2013Comments Off on Kid Rock Looking For A Lucky Fan To Serve As His Personal Bartender

Kid Rock is upping the ante on his tour with a bold request – his very own personal bartender to create and serve Jim Beam cocktails during his cross-country “Best Night Ever” tour.

Through a nationwide search, Kid Rock and Jim Beam are accepting applications from fans 21 and over who are ready to take on this challenge and join the rock star himself as his resident bartender this summer.

The winning fan will receive a prize package, personal mixologist training and the opportunity to bartend backstage for Kid Rock during three of his summer tour stops. 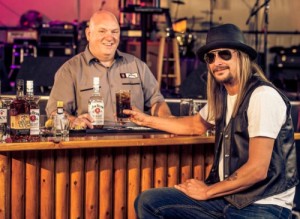 The once-in-a-lifetime opportunity will be awarded to one lucky fan who embodies the spirit, enthusiasm and creativity of our seven generations of Beam distillers to join Kid Rock on tour.

The grand prize winner will have the opportunity to join the tour for three separate concert stops throughout the summer: Irvine, Calif. (July 26); Detroit, Mich. (August 10); and Chicago, Ill. (August 30); receive a training by Beam Master Mixologist Bobby “G” Gleason and a $10,000 prize package.

Now through June 7, fans interested in applying can visit here for more information, the official contest rules and application instructions.

“We figure it’s time to pour him a drink or two, and we need our fans to help us make Kid Rock’s perfect cocktail. It’s a tough job, but somebody’s got to do it!”

This year marks the fifth consecutive year that Kid Rock and Jim Beam have come together to bring legendary music experiences to fans across the country.

Since partnering back in 2009, the World’s No. 1 Bourbon and Kid Rock have launched breakthrough consumer programs that have provided one-of-a-kind opportunities for music and bourbon fans alike.

This year builds on those groundbreaking music experiences as Jim Beam and Kid Rock honor their loyal fans with Jim Beam’s Mix for Kid Rock Contest.

Jim Beam is also sponsoring Kid Rock’s 2013 concert tour, which kicked off earlier this year and concludes this September in Tampa, Florida.

Kid Rock Looking For A Lucky Fan To Serve As His Personal Bartender added by Newsroom on May 9, 2013
View all posts by Newsroom →