By Newsroom on September 25, 2014Comments Off on Kit Kat Pokes Fun At Apple’s ‘#Bendgate’ Scandal In Cheeky Tweet 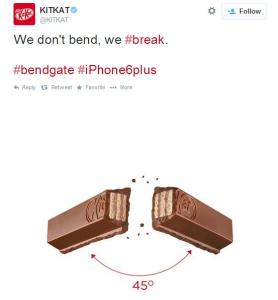 Several brands have responded to Apple’s #Bendgate scandal, but so far, Kit Kat seems to be leading with arguably the best response with this tweet, which has garnered 6,400 retweets and counting.

Kit Kat posted a photo of their famous chocolate-covered wafer biscuit snapping neatly in two, with a simple caption that reads “We don’t bend, we #break”.

It is cheeky and from what a user pointed out on Adweek, Kit Kat happens to be the name of the current version of Android.