By Newsroom on June 16, 2015Comments Off on Kyra & Constantin Bring a Taste of ‘The Good Stuff’ to New Anchor Cheese Spot

Creature of London and Arla Foods have launched a radical new campaign for Arla Foods’ Anchor brand. In a bold departure from Anchor’s past marketing, the campaign is focused on driving mass consumer awareness of Anchor and its rich tasting dairy products, specifically Anchor Cheddar and its Anchor Butter range.

This first campaign for Creature and the Anchor team kick starts with an animated 30-second TV advert for Anchor Cheddar, which launches on 15th June, featuring a family of furry creatures. The ad follows the family as Mum and Dad try desperately to enjoy a romantic picnic amongst the amusing realities of everyday life.

Dan Shute, Managing Partner at Creature of London commented, “ It’s brilliant to be working with such a well loved and established brand, and more importantly, with a great team who are as excited as we are to embrace a new creative approach to how they connect with their customers.” 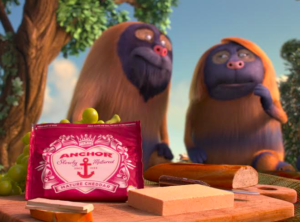 “This new campaign is completely different to anything we’ve ever done before as we wanted a creative that would really stand out and make consumers sit up and take notice. By showcasing the real richness in family life with our ‘Hugglers’, we can create an emotional connection with the audience and celebrate those family moments where rich Anchor Cheddar plays a central role.” said Mike Walker, Business Unit Director at Arla Foods.

In addition to the new TV campaign, Anchor Cheddar will be supported with in-store sampling and a digital campaign running throughout the course of the eight-week campaign. Another unique creative spot and supporting campaign will air later in the year to support Anchor Butter.

Kyra & Constantin Bring a Taste of ‘The Good Stuff’ to New Anchor Cheese Spot added by Newsroom on June 16, 2015
View all posts by Newsroom →