By Newsroom on May 8, 2017Comments Off on Lidl Gets Up Close and Personal in New Gogglebox-Style Campaign

Every trolley tells one hundred stories, which is why Chemistry is turning the lens on the public and getting up close and personal for Lidl’s new full shop campaign, TrolleyCam.

Drawing inspiration from the soaring popularity of reality TV, the global supermarket chain and Irish agency filmed customers as they carried out their weekly full shop, capturing highly-relatable comedic moments that occur between families and friends as they bicker and banter through the aisles. 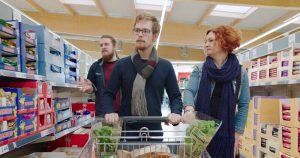 “TrolleyCam’s charm lies in its honest and effortlessly enjoyable insight into an activity that affects us all,” explains Sinead Cosgrove, Planning Director at Chemistry. “We see the fascinating and varying dynamics; from a mother fending off her children’s pleas for fast food to a couple expecting a baby stocking up on supplies – many of whom are pleasantly surprised at how little their full shop cost at Lidl.”

In a continuation of Chemistry’s partnership with Lidl, this latest spot builds on last year’s Christmas ‘Homecoming’ campaign. For TrolleyCam, the team opted for an off-the-wall approach, with no brief and no actors – just real shoppers captured in a fresh, engaging, and authentic way. Filming in four stores across Ireland, the team selected real people that represent the broad range of Lidl’s clientele, shining a light on people at different life-stages.

Robert Boyle, Deputy Creative Director of Chemistry, comments: “We worked in close conjunction with Antidote’s Brian Raftery and director Ken Wardrop – a huge talent and a pleasure to work with. The casting involved an extensive six-week process and covered over 450 people, with a strong focus on the needs of the project and the desire for diversity.”

Since bursting onto the scene in 2000, Lidl has been steadily disrupting the grocery market. Such is its popularity and command of the market that close to seven in 10 Irish people now claim to do some or all their shop at Lidl. 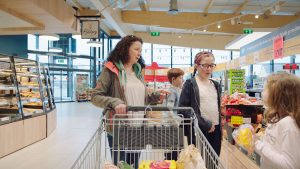 Chemistry worked closely with Lidl to design a campaign that operates on several layers of engagement. The film is supported by a dedicated, custom-developed website, full of inspiring recipes, where customers can browse the shopping bags or favourite meals of the people featured in the campaign. Carefully designed to offer shoppers genuine insight on how to get the most out of their shop, the supermarket has enrolled an econometrician as a full shop ambassador, who is responsible for supplying further content to provide shoppers with ideas and insights.

“Lidl has extended its range extensively in the past 12 months, filling in any gaps in its offering and adding products that we know shoppers want,” says Deirdre Gunning, Client Service Director at Chemistry. “The key task in this campaign is to showcase how great Lidl’s range is and, of course, the great savings that shoppers will make by doing their full shop in their stores. The retailer has invested heavily in upgrading its stores, all of which puts Lidl in a strong position to compete not just on value but on the whole shopper experience.”

The campaign is now live throughout Ireland on TV, online, print, radio, digital, and OOH platforms. 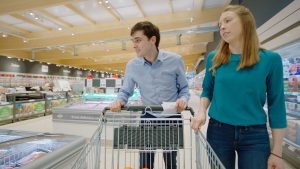 Lidl Gets Up Close and Personal in New Gogglebox-Style Campaign added by Newsroom on May 8, 2017
View all posts by Newsroom →