By Newsroom on February 22, 2016Comments Off on Martell’s Cognac Packaging Turns into a Google Cardboard Headset

Cognac brand Martell in partnership with creative agency AKQA, has created packaging that transforms into a virtual reality (VR) headset to take fans on a journey from Cognac to Shanghai.

The packaging for the limited edition ‘La French Touch’ Martell cognac can be made into a Google Cardboard VR headset and when combined with rendering software WebGL it creates an immersive gaming experience. 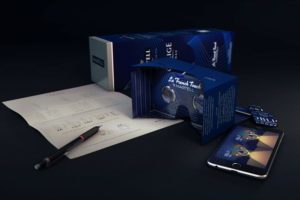 Gamers can take control of a bird, the Martell logo, to bring the bird and the La French Touch house music genre from Cognac in France to Shanghai.

Players fly through a 3D environment of animations, passing a river and Paris at night, crossing mountains and an ocean, before arriving at a bar in Shanghai.

Points are scored by collecting along the way and players are encouraged to share their score on social channels.

The gameplay is accompanied by a soundtrack composed by French musician Danger.

Martell’s Cognac Packaging Turns into a Google Cardboard Headset added by Newsroom on February 22, 2016
View all posts by Newsroom →