Maxus India Take Us On An Absolut Journey Across India

By Newsroom on January 26, 2016Comments Off on Maxus India Take Us On An Absolut Journey Across India

Absolut India has unveiled a new initiative that uses a combination of filmmaking techniques and encapsulates the journey of Absolut India’s Limited Edition bottle across the country. The initiative has been launched across 32 locations, 4 Indian cities and comprises 52,500 pictures, 200 video clips, 300 hours of post with just 1 bottle. 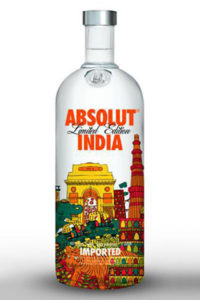 The Absolut India Journey is a tribute to the cultural melting-pot that exists in this country and the bottle design highlights India’s vibrancy and ecstatic chaos. The objective behind the Absolut India Journey films was to portray how an empty Absolut bottle traverses the length and breadth of India, and embodies the various elements of the country along the way. The idea of the digital campaign, which was conceptualised and executed by Supari Studios in collaboration with Maxus India, was to make the journey interactive for consumers of the content, letting them decide the path that the bottle takes as it travels through India.

In order to truly encapsulate the cultural, ethnic and architectural diversity that exists within the country, the team focused on developing a creative collaboration between artists across mediums to symbolize this country’s melange. Supari Studios brought together four filmmakers, three motion graphic artists, three cinematographers, two graphic artists, one music director and a 10 member crew. The graphic artists and cinematographers brought their own styles and differences to add to the diversity of the film, but to tie the entire video together the team had one director (Akshat Gupt), and one sound producer & composer (Suhrid Manchanda).

In terms of production, the films were created using combination of engaging techniques from time lapses (35 time-lapses created using over 52,500 pictures) to a double exposure treatment within the bottle (using over 200 video clips) that were shot across 4 cities. The films also used motion graphics extensively with 80 frames of graphics created that were used to blend with the footage and show the range of colours and ethnicities that exist within India. The graphics also incorporated elements of the bottle cover design as teasers for the final bottle reveal at the end of the master film.

Last, one of the most important elements for the campaign was the soundtrack that ties the entire journey together. What’s interesting to note is that the base sound of the track was created using the Absolut bottle itself. The Supari Studios team organically produced foley sounds from across the country to authentically portray the character of different parts of the country thereby epitomizing the journey of the Absolut India bottle.

Maxus India Take Us On An Absolut Journey Across India added by Newsroom on January 26, 2016
View all posts by Newsroom →