By Newsroom on January 12, 2017Comments Off on McDonald’s Japan Holds ‘General Election’ for Burger Upgrade

McDonald’s Japan has begun a social media campaign that lets its customers vote for their favourite burger, with the winner becoming part of a free upgrade meal deal. 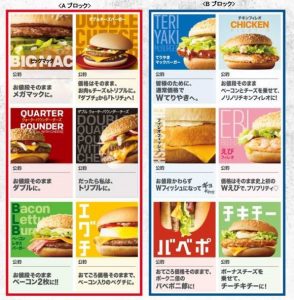 A dozen of the fast-food chain’s most popular sandwiches will battle it out to become “the number one burger in Japan.”

The 12 items will be divided into two Blocks. Block A will consist of beef-based burgers, while Block B will be made up of burgers using meat other than beef.

From 6th to 24th January 2017, voting will begin to choose a winner in each block. After that, the winners of each block will go head-to-head in a final vote from 25th to 31st January after which the number one burger will be declared. 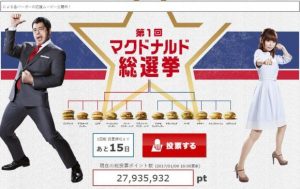 Votes are accumulated in three ways:

Participants can “Vote by Eating” every time they purchase one of these sandwiches. Their wrapper will have a special QR code that provides a free wallpaper for the user’s smartphone and enter them in a chance to win a 4,000 yen (US$34.45) McDonald’s Card.

The second way is “Vote by Tweeting”, letting Twitter users tweet their favourite with a hashtag. However, given the difference in tweeting about a Big Mac and actually putting your money where your mouth is, one Vote by Eating is worth 100 Votes by Tweeting.

Finally, the sales of each burger will also be factored into the final decision.

As part of the promotion, each burger has a central campaign promise that they will deliver if they’re chosen as the number one. For example, the Big Mac will have extra beef patties if elected the winner.

They all come in the form of upgrades for no extra charge during the first week of their presidency from 1st to 7th February, 2017.

In addition to their campaign promises, each burger has their own campaign video outlining why they deserve to be crowned number one in Japan.