McDonald’s Made a Big Green Rainbow Appear in Chicago Ahead of St. Patrick’s Day

By Newsroom on March 19, 2018Comments Off on McDonald’s Made a Big Green Rainbow Appear in Chicago Ahead of St. Patrick’s Day 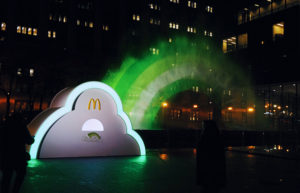 McDonald’s often likes to go big for St. Patrick’s Day in its hometown of Chicago with fun activations around its iconic, seasonal Shamrock Shake.

A few years back, Leo Burnett dumped a giant Shamrock Shake into the Chicago River, which the city turns green every March 17 as part of the Irish celebration. Well, in 2018, McDonald’s agency We Are Unlimited did something a little more elevated—working with artist Andrew Shoben and production studio Chicago Scenic to get a big green rainbow to magically appear in Daley Plaza. 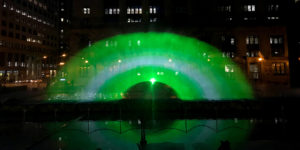 The rainbow, dubbed the “Shambow” (short for Shamrock Rainbow), was made using water vapor, fog and projection mapping. It appeared next to a popup Shamrock Shake shop, where McDonald’s gave away the minty treats for free.

“Like the Shamrock Shake, a rainbow is a symbol of happiness. And what better way to express that than with the Shambow—it’s almost like nature’s billboard,” says We Are Unlimited chief creative officer Toygar Bazarkaya. 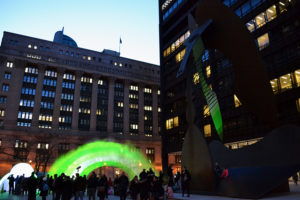 We Are Unlimited said it used social listening to identify Chicago as one of the cities with the highest volume of social chatter around the doom and gloom of winter. The Shambow, a rep for the agency said, was meant to offer “unique experience for people in the hopes that they are inspired to ‘shake’ off their winter blues in anticipation of the arrival of spring.”

McDonald’s Made a Big Green Rainbow Appear in Chicago Ahead of St. Patrick’s Day added by Newsroom on March 19, 2018
View all posts by Newsroom →