By Newsroom on September 24, 2015Comments Off on McDonald’s Sweden Unveil Online Table Reservations in Ad For New Burger 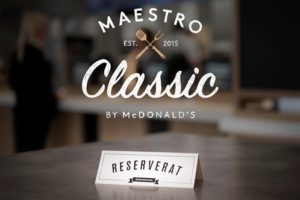 McDonald’s has begun trailing a table online reservation system at its restaurants in Sweden in the latest innovation from the fast food giant.

The table booking system will run from 25 September until 2 October across 30 McDonald’s restaurants in Sweden as part of a promotional campaign for its new gourmet-style Maestro Classic burger.

In a statement Jeff Jackett, marketing director at McDonald’s Sweden, said it wanted to give customers a “unique and memorable experience” and saw the more upmarket burger as an opportunity give them a chance to do so.

The stunt is the latest in a string of initiatives taking place across McDonald’s restaurants including making its breakfast available all-day in the US and other table reservation options in various global markets including France which introduced the service last month. Earlier this year it launched a Big Mac clothing range in Sweden and announced that McDonald’s bed linen, wallpaper and a dog coat would soon follow.

McDonald’s is attempting to turn around a difficult year which has saw weak second quarter sales figures which are potentially paving the way to a fourth successive year of declining sales as it contends with new, fast-casual rivals such as Chipotle and Panera.