By Newsroom on July 29, 2015Comments Off on Mentos Unveiled As Official Sponsor To BT Sport Rugby Aid 2015 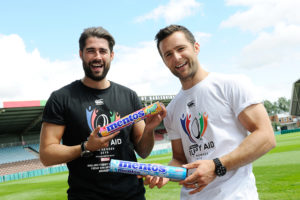 Mentos has been unveiled as an Official Sponsor of BT Sport Rugby Aid 2015 In Association with The Sun.

The event in aid of charity Rugby For Heroes of which Mike Tindall MBE is Patron, sees celebrities and some of the greatest former professional rugby players battle it out in an England v Rest of the World fixture at Twickenham Stoop, home of Harlequins RFC, on Friday 4th September. Rugby For Heroes raises funds and awareness through the sport of rugby, the fan community and the wider professional player network, to support military personnel who are making the transition back from military service to civilian life.

The new partnership represents a significant investment from Mentos, the UK’s fastest growing mint brand, and will be activated through stadium branding, PR, social media, sampling and competitions in the build-up to the match. In what is believed to be a UK first, Mentos will also be branding the posts and cross-bar of the Twickenham Stoop pitch, delivering a prominent presence when a conversion or penalty is scored during the live televised event.

Rugby Aid will be broadcast live on BT Sport, along with additional ‘behind-the-scenes’ shows airing separately.
Mentos Brand Manager Claire Powley said: “It’s such an exciting year for rugby in the UK, and we’re thrilled to be partnering with Rugby Aid 2015. Not only is it an extremely worthy cause but it presents us with a great opportunity to connect fans with Mentos. The event will be the perfect platform to launch our new global ‘Who Says No to Mentos’ campaign encouraging people everywhere to make fresh, new connections with those around them – just like the two Rugby Aid teams!”

“Mentos are perfect for sharing so where better to enjoy them than at a sporting occasion like Rugby Aid. We’re confident our Rugby Aid partnership will be a great success,” added Claire.

Rugby Aid Event Director Kenneth Shepherd said: “It’s great to have such a well-recognised brand on board. Their plans will really engage fans and we’re very much looking forward to working with them to drive further awareness for Rugby For Heroes and the Mentos brand with the aim to raise as much money as possible for military heroes.”

Mentos Unveiled As Official Sponsor To BT Sport Rugby Aid 2015 added by Newsroom on July 29, 2015
View all posts by Newsroom →