By Newsroom on July 17, 2018Comments Off on Mercury Cider Launches ‘The Mercury Tough Test’ in Latest Campaign

Mercury Cider, part of Carlton United Breweries, has joined forces with the tough men of the AFL and NRL to launch ‘The Mercury Tough Test’ with a TVC campaign via PHD Content – the media agency’s content and partnerships arm.

The spots celebrate Mercury’s role as official cider of the AFL and NRL. 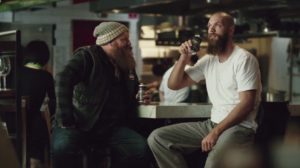 In the TVCs, which were directed by Dylan Harrison, players Melbourne Ruckman, Max Gawn and Cronulla Sharks’ co-captain, Wade Graham, are put through their paces, trying their hands at what can be considered truly tough jobs.

As Australia’s oldest cider brand, first brewed for the tough men of Tasmania in 1911, Mercury Cider has always celebrated those who step up under tough circumstances, stemming from the belief that Aussies respect those who tackle whatever is thrown at them.

In addition to the TVCs, Mercury Cider, in partnership with PR agency Bastion Effect, has also powered a nationwide study to uncover what constitutes being “tough” in 2018 and identify the toughest jobs across the country. The campaign will also be supported by brand integrations with programming across Fox Footy and Fox League.

Mim Orlando, Brand Director, Cider & Spirits, AB InBev said: “Through all of our discussion with consumers, it’s become clear that Australia’s views on what defines tough have shifted. The AFL/NRL players have always been exceptionally tough, but the fans seem to have a greater appreciation for tough acts of all kinds, not just physical. This is being reflected in society too; tough comes in all shapes and sizes, and we’re proud to be able to reflect that in a fun way across our new campaign.”

“PHD is delighted to work on this campaign with our client, Mercury Cider, the first creative work we’ve done for CUB since winning their media business in 2017. Hopefully the spots succeed in challenging the view of traditional toughness in a fun, tongue-in-cheek way,” added Angela Rapley, Director of Content at PHD Content.

Mercury Cider Launches ‘The Mercury Tough Test’ in Latest Campaign added by Newsroom on July 17, 2018
View all posts by Newsroom →