By Newsroom on February 8, 2016Comments Off on Michelob ULTRA Makes Strong Return to Super Bowl with #Breathe

Michelob ULTRA, the fastest growing beer brand in the US, led Anheuser-Busch’s advertising charge on Super Bowl by airing “Breathe” in the coveted A1 position following kickoff. To set the tone for the game (and ads) to follow, the 30-second spot by FCB Chicago brought the energy and dedication of the Michelob ULTRA drinker to life through the vision of acclaimed action film director and fitness enthusiast Antoine Fuqua.

“Breathe” highlights the many ways that Michelob ULTRA drinkers put in the effort to live an active, balanced life, in a disruptive, grittier style that people haven’t seen before in the brand’s previous marketing. The spot also debuted Michelob ULTRA’s new tagline and 2016 brand platform, “Brewed for Those Who Go the Extra Mile,” which conveys the idea that enjoying a beer socially and living an active life don’t need to be mutually exclusive. This is the brand’s first Super Bowl appearance since 2010.

“We know that Michelob ULTRA drinkers exercise regularly and still make time to have a social life,” said Edison Yu, Vice President,Michelob ULTRA. “Doing this isn’t easy, especially with so many other demands, so we made ‘Breathe’ to celebrate those who put in this extra effort and choose a beer that they can enjoy without sabotaging their hard work.” 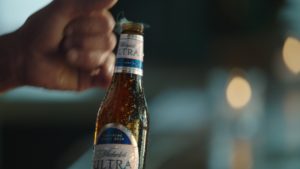 In addition to “Breathe,” Michelob ULTRA and Antoine Fuqua teamed up for another 30-second spot that would have aired during the Super Bowl only if the game went into overtime. This additional high-energy spot will also air throughout the first part of 2016 and be part of an integrated marketing campaign rooted in the effort it takes to live an active, balanced life.

“I love the idea of getting into the head of the everyday athlete—the person who wants to do their best and be their best,” said Fuqua. “I tried to capture this person’s perseverance, resilience, focus, and how Michelob ULTRA fits into their everyday life.”

Celebrating the active life has been central to Michelob ULTRA since its launch in 2002. This differentiated positioning has accelerated Michelob ULTRA’s growth, making it the fastest growing beer in the industry in 2016.  And with just 95 calories, 2.6 carbohydrates, and an exceptional taste, Michelob ULTRA is the superior light beer that doesn’t undo all the hard work our drinkers put in every day.

Michelob ULTRA Makes Strong Return to Super Bowl with #Breathe added by Newsroom on February 8, 2016
View all posts by Newsroom →