By Newsroom on November 3, 2014Comments Off on M&M’s Crispy Offered To Trick-Or-Treaters … If They Find The Right House

New M&M’s Crispy Milk Chocolate Candies were available for trick-or-treaters this Halloween – but only at one house in the entire country. 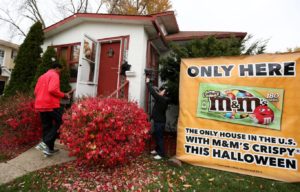 Last month, Mars Chocolate North America announced that after a decade of pleas from consumers, the company is officially bringing back M&M’s Crispy to stores in the US in January 2015. Countless fans across the country immediately rejoiced – flooding social media channels and turning M&M’s Crispy into a global trend on Twitter in the process. But one fan named Olivia in Chicago asked an intriguing question on the brand’s Facebook page: Why not make M&M’s Crispy available at Halloween? 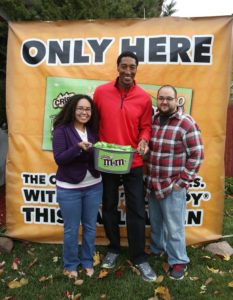 Olivia got her wish. Since she is a diehard fan of M&M’s Crispy and Chicago basketball, M&M’s Brand joined with hoops legend Scottie Pippen to surprise Olivia with a batch of M&M’s Crispy that she could pass out to trick-or-treaters. Thus, her suburban Chicago home became the only house in the country with M&M’s Crispy this Halloween.

“Delivering M&M’s Crispy to one fortunate house is more proof that when M&M’s fans talk, we listen,” said Seth Klugherz, Senior Director, M&M’s Chocolate Candies. “It was the fans who told us M&M’s Crispy are so irresistible we had to bring them back, and we’re finding fun ways to reward their passion for this delicious product even before the product hits store shelves.”

M&M’s Crispy feature a delectable, crispy center covered in rich, creamy milk chocolate, enclosed in a colorful candy shell. This crispy and crunchy treat is slightly larger than the original milk chocolate variety, and will be featured in a new, eye-catching, bright green bag.

M&M’s Crispy Offered To Trick-Or-Treaters … If They Find The Right House added by Newsroom on November 3, 2014
View all posts by Newsroom →