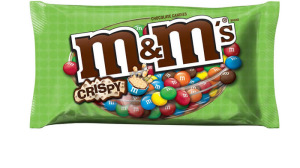 M&M’s Brand has a message to all the diehard fans of M&M’s Crispy Milk Chocolate Candies: They’re finally back … because of you.

After a decade of phone calls, petitions, Facebook posts and countless other pleas, Mars Chocolate North America announced M&M’s Crispy will return to stores nationwide in the USA in January 2015, following a 10-year hiatus.

M&M’s Crispy feature a delectable, crispy center covered in rich, creamy milk chocolate, enclosed in a colorful candy shell. This crispy, crunchy and delicious treat is slightly larger than the original milk chocolate variety, and will be featured in a new, eye-catching, bright green bag.

The launch of M&M’s Crispy is the biggest M&M’s Brand launch since the introduction of M&M’s Pretzel Chocolate Candies in 2010. M&M’s Crispy was first available as a limited-edition item in 1998, and the product’s re-emergence is a testament to the unwavering loyalty shown by consumers and media who refused to let the beloved flavor variant go the way of laser disc players, dial-up Internet and other turn-of-the-millennium relics. According to records in Mars Consumer Care, M&M’s Crispy is the No. 1 Mars variant no longer on the market requested to be “brought back.” 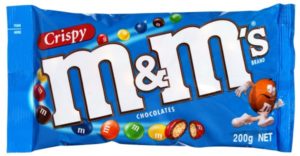 “When M&M’s fans talk, we listen. And consumers have made it clear that M&M’s Crispy are so irresistible, we had to bring them back,” said Seth Klugherz, Senior Director, M&M’s Chocolate Candies. “We’re sure existing fans will be thrilled to see M&M’s Crispy back in stores coast to coast, but we’re just as excited to introduce this delicious product to a new generation of chocolate lovers.”