By Newsroom on February 3, 2014Comments Off on M&M’s Delights Viewers With ‘Nutty’ Super Bowl Ad

Fans turned MetLife Stadium into a mass of orange, blue and green on Super Sunday, but the color that really stood out in Super Bowl XLVIII was … yellow.

The 45-second commercial, created by BBDO New York, aired during the first half of Super Bowl XLVIII on FOX – the third straight year the M&M’S Brand has appeared in the Super Bowl.

The spot opens with ominous, cinematic shots of a car creeping toward a secluded mansion. A powerful, mysterious figure, played by the imposing actor Rade Šerbedžija, opens the car’s trunk and speaks to an unseen figure inside, threatening in a foreign language to chop them up and sprinkle their remains … on an ice cream sundae. The humorous reveal shows the M&M’S Peanut spokescandy Yellow seated among grocery bags, blissfully unaware of just how irresistible he is.

“We chose to put M&M’S Peanut front and center because it’s a special product worthy of the biggest stage,” said Seth Klugherz, Senior Director, M&M’S Chocolate Candies. “Our Super Bowl commercial and campaign provided an outstanding platform to communicate our quality message that each M&M’S Peanut is literally 1 in 100 – meaning we have to sort through 100 different peanuts, just to find one that’s lucky enough to make its way into a bag of M&M’S Peanut.” 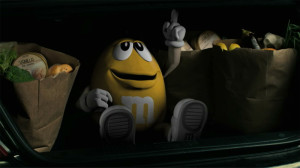 The Super Bowl XLVIII commercial is the latest exciting effort in the brand’s “Year of Peanut” integrated marketing campaign, a yearlong effort to showcase the irresistibility of M&M’S Peanut.  The campaign has included several exciting activations, including:

Yellow was first introduced along with M&M’S Peanut in 1954.  Since then, the irresistible chocolate-coated peanut has captured the hearts and “taste buds” of the nation, but he usually plays a supporting role to his best friend and fellow spokescandy Red.