By Newsroom on October 9, 2015Comments Off on M&M’s Joins Forces with ‘X-Men: Apocalypse’ 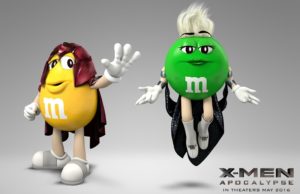 Mars Chocolate North America announced a partnership between M&M’s Chocolate Candies and 20th Century Fox’s upcoming motion picture event “X-Men: Apocalypse.” The deal makes M&M’s the exclusive chocolate and confectionery promotional partner of the film, which opens Friday, May 27 and is considered one of the most widely anticipated movies of 2016.

“This deal truly brings together two of the biggest superheroes of Hollywood – M&M’s and X-Men,” said Berta de Pablos-Barbier, Vice President, Marketing, Mars Chocolate North America. “X-Men is one of the most popular and thrilling franchises in movie history, and we like to say M&M’s are the official chocolate candies of the movies. Together, we hope to make the experience even more fun for movie lovers.”

“Who doesn’t love M&M’s and their hilarious band of characters?  M&M’s Chocolate Candies are a part of the movie experience, so what better movie to pair them up with than the next film in our epic X-Men film franchise,” said Zachary Eller, Senior Vice President, Marketing Partnerships, 20th Century Fox. “The work that Mars is doing to bring this partnership to life is fantastic.”

M&M’s Brand plans to leverage the partnership with a full 360-degree campaign including retail displays and packaging; digital and out-of-home media; TV and in-cinema advertising; consumer promotions; public relations; and social media content. M&M’s World and My M&M’s also will support the partnership with themed merchandise and special blends of candy featuring icons from the film.

M&M’s will tease the partnership at the Mars booth space at New York Comic Con, Oct. 8-11 at the Javits Center in Manhattan.

M&M’s Joins Forces with ‘X-Men: Apocalypse’ added by Newsroom on October 9, 2015
View all posts by Newsroom →