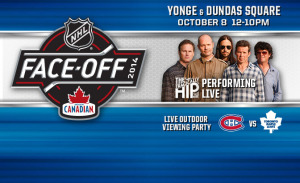 On October 8 the puck droped for the National Hockey League’s 2014-15 season and for many hockey fans the action really started at Noon during the 2014 Molson Canadian NHL Face-Off event at Toronto’s Yonge-Dundas Square.

The event, which featured a free concert by The Tragically Hip, giveaways and a live broadcast viewing party featuring the Montreal Canadiens at Toronto Maple Leafs, was a chance for Molson Canadian to join the NHL and diehard hockey fans in celebrating the return of Canada’s national pastime.

“It’s become tradition for us to be on-site and help celebrate the NHL’s opening night festivities,” says Andy Gervais, Brand Manager of Molson Canadian. “For us, NHL Face-Off has also come to symbolize the start of ‘beer season,’ allowing us to unveil new programs designed to excite our drinkers throughout the season.”

Back to hockey roots

Coinciding with the drop of the first puck was the launch of a new television spot, featuring the now famous Molson Canadian Beer Fridge, as it departed for an epic rink in the mountains created to bring hockey back to where it was born: outside, on a frozen Canadian pond.

Over the course of the 2014-15 NHL season, the story of the rink will play out in a series of TV spots linked to key milestones throughout the hockey calendar. 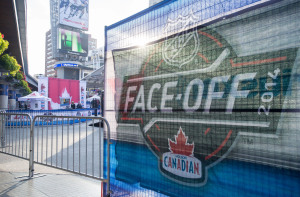 Molson Canadian is even giving fans a chance to win an unforgettable trip to this rink by using the #ANYTHINGFORHOCKEY hashtag on Facebook, Instagram or Twitter. Fans will earn their opportunity to win by sharing stories that detail the lengths they go to in support of the game of hockey.

“Day one of the season is probably the best example of why the NHL is such a perfect partner for our business,” said Gervais.

“We start the day by having our in-house events team create an epic fan experience, and finish it revealing a new TV spot to millions of avid fans tuned in for one of the NHL’s greatest rivalries.”