By Newsroom on January 9, 2017Comments Off on Mountain Dew Celebrates the Exhilarating Feeling of Doing in a New Global Campaign

What’s better, sitting on your couch watching someone skydiving or climbing a mountain, or getting off your butt and actually doing it yourself?

While it may depend on who you ask, most would argue the experience of doing is much greater than watching, which is the premise for Mountain Dew’s new global ad campaign.

Dew’s team landed on a new slogan: “There’s no feeling like doing.” That was based on the insight that “it’s not the action itself that drives people to pursue exhilarating activities, it’s the feeling of doing it,” and that there is “an actual release of chemicals that triggers a euphoric sensation when you’re doing something exhilarating,” said Ryan Collis, senior director of marketing for Mountain Dew.

The new campaign includes the slogan, a new spot starring pro skateboarder Sean Malto and a new visual identity for the brand.

In “Fade Away,” the first 30-second spot from BBDO New York under the new slogan, Malto demonstrates some of his skating abilities, leaping over a car before enjoying a cold Mountain Dew.

“In previous years we’ve focused more on the action of doing, but for this campaign we entered a new territory that explored and exposed the feeling of doing,” Collis said. “There is an actual euphoric high one experiences when doing something exhilarating, and we took on the challenge of bringing that moment to life.” 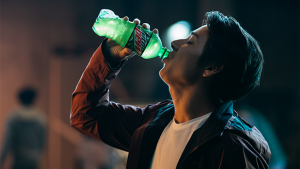 That feeling is capture nicely in the commercial as Malto soars over a car in slow motion while soothing classical music plays in the background, giving the viewer time to really soak in that exhilarating feeling they are watching on screen.

Another shift for Mountain Dew with this latest campaign is the brand’s adoption of a mobile-first strategy. According to Collis, “the ads were designed from the outset to live within the mobile environment.”

Mountain Dew Celebrates the Exhilarating Feeling of Doing in a New Global Campaign added by Newsroom on January 9, 2017
View all posts by Newsroom →