By Newsroom on September 14, 2016Comments Off on Mountain Dew Unveils SuperSnake – A Hybrid Snowboard and Skateboard Dream Course on Snow

Mountain Dew, in collaboration with Snow Park Technologies and CA RampWorks, announced the creation of SuperSnake, the ultimate snowboard and skateboard hybrid dream course on snow. A 22-minute short film – “SuperSnake” – will unveil the never-been-done build out and completely unconventional riding experiences that brought elite skateboarders and snowboarders together to ride alongside each other for the first time ever. It will be televised nationally on Sunday, October 16, 2016 during ABC’s weekly ‘World of X Games‘ action sports content series.

“SuperSnake’s concept showcases Mountain Dew’s ongoing support of creating original, fun and progressive opportunities for both our athletes and fans to enjoy,” said Greg Lyons, senior vice president of marketing, Mountain Dew. “We are giving the Dew Nation and our roster of athletes something that has never been done before, driving creative instigation that positively affects the entire action sports community and beyond.” 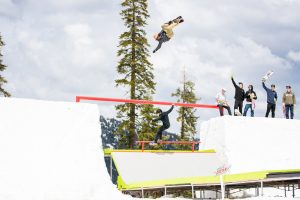 SuperSnake, a cutting-edge course that took 14 days to create, highlights professional Mountain Dew skateboarder Sean Malto and Olympic snowboarder and DEW rider Danny Davis alongside nearly a dozen other notable action sports athletes including professional snowboarders Jeremy Jones and Scotty Lago, and Mountain Dew skate athletes Trevor Colden, Chris Colbourn, Jordan Maxham, Nick Tucker and Micky Papa, as they push the limits of what is possible on both a skateboard and a snowboard – simultaneously!

“It’s really awesome to have skateboarders and snowboarders come together on one course,” said Davis. “Building on the momentum that Mountain Dew has created through my vision of Peace Park, SuperSnake pushes creativity and stylistic riding through the athletes’ visions and the course builders’ innovations and expertise, but most importantly, it’s always about progressing the sports and having fun.”

“I never thought I’d ever be skating on a course on snow,” adds Malto. “The coolest part was skating a snake run on top of snow and having the insane views of the mountains. Being able to skateboard alongside the legendary Danny Davis snowboarding was an experience I’ll never forget.”

The remarkable course was built on snow at Sierra-At-Tahoe, just outside of South Lake Tahoe, Calif., creating an unprecedented skateboarding and snowboarding experience with a total of 24 combined skate and snow features including jibs, hips, quarter pipes, volcanoes and more for elite riders to enjoy. The SuperSnake film takes viewers through both the creation of the build out and the riders’ experiences, highlighting the first-ever 1,075-ft skate snake run winding downhill throughout the snow park course.

Mountain Dew Unveils SuperSnake – A Hybrid Snowboard and Skateboard Dream Course on Snow added by Newsroom on September 14, 2016
View all posts by Newsroom →