By Newsroom on February 4, 2014Comments Off on UK Lights up Coca-Cola Ordered Artwork with Optimism on Social Media

Coca‑Cola has unveiled a unique piece of artwork, Power of Optimism, on London’s Southbank.

The one-day installation – which will be situated at Observation Point – has been designed and built by British artist David Boultbee to celebrate how the nation has spread positivity and optimism on social media throughout January, typically characterised as the gloomiest month of the year.

“It’s great to see that Brits are overwhelmingly using social media to spread messages of positivity. With 15 million active UK Twitter users, social media is clearly an important tool for people to share the little things make them feel optimistic about the world: their ‘reasons to believe’,” said Brid Drohan-Stewart, Marketing Activation Director, Coca-Cola Great Britain. “Even in the winter months, with the short days and miserable weather, it’s refreshing that people are maintaining a sunny outlook online.”

Power of Optimism is made up of a combination of ten one-metre-squared cubes, five of which are linked to a real-time feed of tweets sent across the UK. These cubes display 20 of the most regularly used positive words on Twitter, including ‘hope’ and ‘proud’, and will light up as they are tweeted throughout the day. 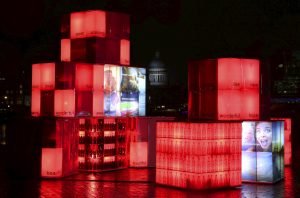 The installation highlights the findings of independent analysis commissioned by Coca‑Cola which offers a counter-intuitive look at the nation’s behaviour online. Using social media analytics tool Crimson Hexagon on tweets sent by UK’s 15 million active Twitter users every day since the start of 2014 and all of 2013, the research reveals that online optimism is thriving and positive tweets are outnumbering negative by more than two to one.

Analysis was also carried out on a handful of the most positive words used on Twitter across 2013 and so far in 2014:

Further analysis on some of the most positive terms found that:

It also revealed exactly when love comes out on top and revealed pinpointed the top five dates in 2013 when the term ‘love’ was used the most: 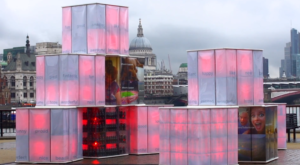 “It was interesting to see the counterintuitive results of Coca‑Cola’s research which showed that the British public is overwhelmingly optimistic in their use of social media. I was really keen to see how I could bring it to life as a piece of interactive artwork. Power of Optimism was designed to give a snapshot of the UK’s behaviour on Twitter over the course of one day. We want to remind people just how many positive thoughts and feelings are being posted every second, and what better way to do this than using these messages to light up the Southbank.”

“Coca‑Cola’s research into UK Twitter behaviour has provided a fascinating, real-time snapshot of what the nation likes to share in 140 characters. Our bespoke sentiment algorithm analyses more than 500,000 words and phrases to categorise tweets as positive, negative or neutral in their tone. The analytics tool has been hand-trained by humans to take into account slang, abbreviations and sarcasm and therefore give the most accurate and insightful results possible.”

UK Lights up Coca-Cola Ordered Artwork with Optimism on Social Media added by Newsroom on February 4, 2014
View all posts by Newsroom →