By Newsroom on September 29, 2015Comments Off on Nescafé Teams up with Google to Offer First Virtual Reality Coffee Experience

Nescafé is the world’s first coffee brand to provide consumers with a fully immersive virtual reality experience, by transporting them to Brazil’s coffee fields using their mobile phones and an ingenious viewer developed by Google.

After downloading the Nescafé 360˚ app, which is also available for Android and iPhone, consumers can slip their mobile into a Nescafé-branded Google Cardboard virtual reality viewer. Manufactured principally from cardboard, the viewer contains two lenses that provide a stereoscopic image.

You can turn your head in any direction to experience Brazil’s coffee fields through three specially filmed 3D videos accessible via the app, which showcase how the brand’s Nescafé Plan is helping its supplier farmers achieve better quality coffee, higher yields and an increased income.

The global launch of Nescafé 360˚ coincides with International Coffee Day on September 29, and involves distributing around 10,000 headsets across 13 markets, either through in-store events or as competition prizes. Non-3D versions of the videos will also be available on YouTube.

The Nescafé 360˚ launch is another significant digital milestone for Nescafé, which recently became the first global brand to move all its international and local websites to Tumblr, as it builds upon its strong social media position and develops closer relationships with younger consumers. 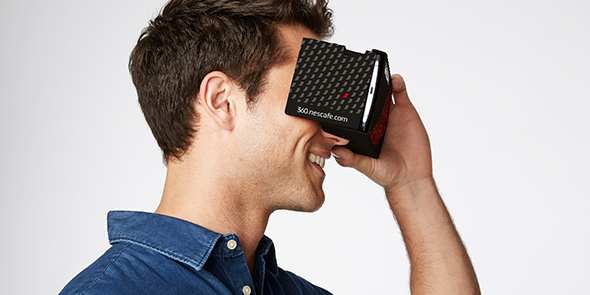 Nescafé Teams up with Google to Offer First Virtual Reality Coffee Experience added by Newsroom on September 29, 2015
View all posts by Newsroom →