By Newsroom on September 13, 2013Comments Off on New Campaign Aims To Remove “Conflict Palm Oil” from America’s Snack Foods 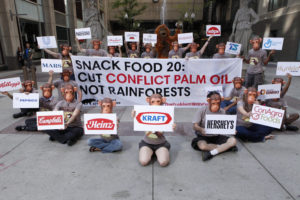 The Snack Food 20, as the group has dubbed them, control some of America’s most well known brands including Pepsi, Heinz, Hershey’s, Kraft and Smuckers.

Palm oil is found in nearly 50 percent of the packaged foods on grocery store shelves, and its use in the U.S. has grown nearly 500 percent in the past decade. 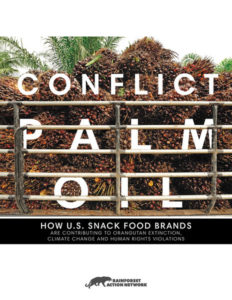 “In the 21st Century customers don’t want to buy crackers and cookies that are responsible for pushing the world’s last wild orangutans to extinction and for horrifying child labor violations. That’s why we’re putting these top 20 snack food companies using ‘Conflict Palm Oil’ on notice that it’s time to create products that reflect the values of their customers and the needs of our planet,” said Lindsey Allen, Executive Director of Rainforest Action Network.

Conflict palm oil is among the biggest threats driving iconic wildlife species like the orangutan to the brink of extinction in Indonesia and Borneo Malaysia. Scientists estimate just 60,600 orangutans remain in the wild.