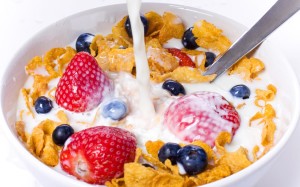 New research from the U.S. Department of Agriculture (USDA), published in the June issue of Procedia Food Science, shows the positive changes food companies have made to enhance the nutrition profile of ready-to-eat cereals (http://ow.ly/lGMke).

According to the study, fiber in breakfast cereals from major manufacturers increased 32 percent, while sugar and sodium decreased 10 percent and 14 percent, respectively, between 2005 and 2011.

“According to the U.S. Dietary Guidelines Advisory Committee, less than one in ten Americans get the recommended amount of fiber in their diets. A 32 percent increase in fiber is a great improvement to help people get the fiber they need,” said Kevin Miller, PhD, a senior nutrition scientist at Kellogg Company and a contributing author to the USDA study.

“The reductions in sodium and sugar also reflect the commitment of food companies to improve the nutrient profile of cereals.  However, it is important to remember that ready-to-eat cereal is a small contributor of sugar and sodium in the diet.  The Dietary Guidelines for Americans notes that cereals provide less than 4% of total sugar and only 2% of sodium in the diet.”

According to Kellogg, they are committed to enhancing the nutritional value of ready-to-eat cereal. This is why they offers more ready-to-eat cereals that are a good source of fiber and include at least 8 grams of whole grains than any other U.S. food company.

Kellogg has also reduced the amount of sodium and sugar in ready-to-eat cereals in the US since 2007.