By Newsroom on August 28, 2015Comments Off on Novak Djokovic Swaps The Tennis Court For The Kitchen

World number one tennis player Novak Djokovic and Jacob’s Creek, the official wine of the US Open, will host a cooking masterclass tonight to celebrate the U.S. launch of the Jacob’s Creek ‘Made By’ film series — films that reveal the story behind the tennis star.

Swapping center court for center stage, Djokovic and Celebrity Chef Casey Thompson will prepare one of his favorite recipes for guests and discuss how his passion for food has played a key role in shaping who he is.

Novak is the star of the Jacob’s Creek ‘Made By’ film series, which since its launch has had six million views. Unscripted and raw, the films show a side of Novak the world has perhaps not seen before. We see the real Novak, recounting the never-before-told life stories from Belgrade, Serbia, celebrating the people, places and passions that have made him the tennis champion he is today.

Commenting on the films at the event, Djokovic said: “I hope by watching the films, people can truly get a sense of my personal journey. Creating the ‘Made By’ film series has allowed me to share my story, in my own words, with the world.” 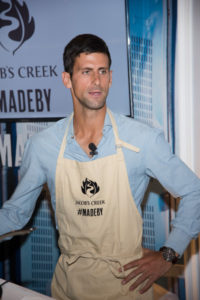 On celebrating the films with a cooking demonstration Djokovic said, “Food is a huge passion of mine which I touch on in the films—from watching my parents in their restaurant in Serbia to understanding the impact food has on my tennis performance. It’s good fun for me to show off my cooking skills and how I handle myself in the kitchen, versus the tennis court!”

Derek Oliver, Global Marketing Director of Jacob’s Creek said, “The ‘Made By’ film series brings to life the determination and dedication Djokovic puts into his career. Our partnership has been truly collaborative, we have worked together to create a series that showcases the authentic spirit that Jacob’s Creek celebrates, one that we are proud to bring to the U.S.”

The ‘Made By’ film series has three chapters, Birthed from Serbia, Shaped by Jelena and Inspired by Dreams. The films plus outtakes and behind the scenes can be viewed here.

The ‘Made By’ films are the next evolution of the extremely successful Jacob’s Creek ‘Open Film Series’ starring tennis legend Andre Agassi.

Novak Djokovic Swaps The Tennis Court For The Kitchen added by Newsroom on August 28, 2015
View all posts by Newsroom →