By Newsroom on May 6, 2014Comments Off on Panda Drinks Relaunch With New Melvin the Panda Character 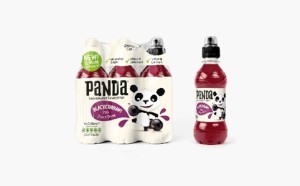 The consultancy has worked with parent company Nichols for around three years, and was brought into reposition Panda in September last year. Panda drinks have only been stocked in Asda for the past three years, but are relaunching in June in Tesco, Asda, Ocado and Booths.

Robot Food says one of the main aims of the project was to make customers aware that the drinks are no longer fizzy, and are made with no added sugar and only natural colours and flavourings.

Simon Forster, Robot Food creative director, says, ‘There was a lot of positive nostalgia around the brand – people remember it from being a kid – but they wouldn’t give it to their kids as they remember it being fizzy and brightly coloured. 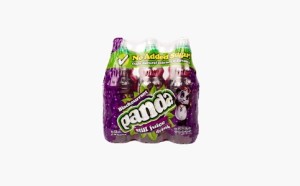 ‘Our task was to completely reposition it as being a credible rival for things like Fruit Shoot’.

The bottles use a cream backdrop to display Melvin, who ‘interacts’ with the fruit illustrations on the packs. Black typography is used for standout, with the branding looking to give a ‘textured’ feel.

Robot Food initially researched the brand’s target market of four to eight-year-old children, finding that eight-year-olds liked a look that was ‘quite edgy and not too cute’, says Forster.

‘That’s why Melvin has quite a rebellious look – he’s not babyish, though he’s quite a young panda’, he adds. 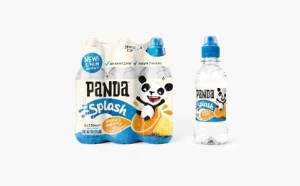 The strapline ‘Refreshingly Fruity Fun’ has been introduced, looking to appeal to health-conscious mothers, and the Splash name has been added to distinguish the flavoured water products from the still juices in the range.

Mike Shaw, client director at Robot Food, says, ‘Melvin is much friendlier, more animated and real than the previous brand character. Active and fun-loving, he interacts directly with the fruit on pack. Around him, we created credible messaging and honest claims in an approachable tone of voice’.

Panda owner Nichols also owns Vimto, which was relaunched earlier this year with new packaging by Springetts and a ‘Vimtoad’ character created by Aardman.

Panda Drinks Relaunch With New Melvin the Panda Character added by Newsroom on May 6, 2014
View all posts by Newsroom →