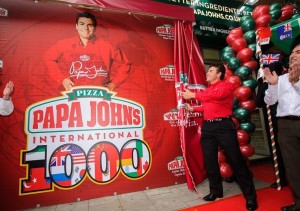 Papa John’s hosted a grand celebration in London in recognition of the company reaching the 1,000th international restaurant milestone. The celebration, which featured an international flair with guests waving flags from some of the 35 countries and territories that Papa John’s operates in, featured Papa John’s founder, chairman and CEO, John Schnatter, and hundreds of Papa John’s fans from around London.

“Today’s event was great way to celebrate a milestone that so few brands have ever reached,” said Schnatter. “We are very pleased with the steady growth of Papa John’s in the international arena over the last 15 years. With more than 1,000 restaurants operating in 35 countries and territories, we are able to deliver on our ‘Better Ingredients. Better Pizza.’ brand promise in virtually every corner of the world, from Europe to Asia, and South America to the Middle East.”

“Over the past several years we have had a concerted focus on our international operations, and have significantly ramped-up our development efforts,” said Tony Thompson, Papa John’s president and COO. “International development is the long-term growth engine for Papa John’s, and we will continue to bring a better pizza experience to more and more consumers around the world.”

Headquartered in Louisville, Kentucky, Papa John’s International  is the world’s third largest pizza company. For 12 of the past 14 years, consumers have rated Papa John’s No. 1 in customer satisfaction among all national pizza chains in the American Customer Satisfaction Index (ACSI). Papa John’s is the Official Pizza Sponsor of the National Football League and Super Bowl XLVIII.