By Newsroom on January 30, 2014Comments Off on Pepsi Gets New York Hyped for Super Bowl XLVIII 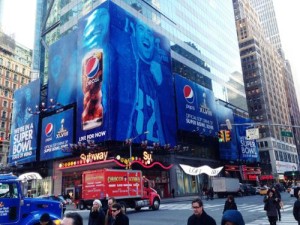 As the official soft drink partner of the NFL for the 12th consecutive year, Pepsi will be highly visible at a number of Super Bowl XLVIII activities from January 29 – February 1 in New York including:

PepsiCo is bringing a free, three-day celebration of Super Bowl XLVIII to Bryant Park. Taking place on Wednesday, January 29, Thursday, January 30 and Saturday, February 1 from 2 p.m. to 6:30 p.m., a custom-designed dome will house numerous stages and diverse performances dedicated to Broadway, art, sports and culture. #PEPCITY will convert to a free, ticketed performance through Eventbrite each evening at 8 p.m., with performances by Austin Mahone, Prince Royce and Ziggy Marley, respectively.

Pepsi will be present at Super Bowl Boulevard offering fans two different digital experiences to get them in the spirit of the game on Wednesday, January 29 to Saturday, February 1 from 12 p.m. to 10 p.m. Located on Broadway between 37th and 38th streets, consumers can take part in a photo experience capturing what it’s like to run out of the tunnel and onto the field. Fans can also record a video with musical props on the stage of the Pepsi Super Bowl Halftime Show.

Consumers who visit the Pepsi experience station and scan their badge will be entered to win two tickets to Super Bowl XLVIX in Arizona.

At Game Day Fan Plaza, Pepsi will create a 360-degree photo experience where consumers get to be onstage as the star of their own halftime show – a ‘Live for Now’ moment captured from all angles.

Pepsi and Uber are teaming up to bring the spirit of halftime to consumers as they travel through the city on Wednesday, January 29. From 11 a.m. to 5 p.m., registered users of the app can opt for a “halftime experience,” which will appear as a special badge. Consumers who sign up to get a free “halftime experience” will be greeted at their location with fun surprises including music, a marching band and cheerleaders.

Pepsi will be visible throughout New York City with innovative digital and out of home advertising creative including billboards with rotating LED screens in Times Square, takeovers at transportation hubs including the Grand Central, Penn Station and Times Square subway stations and a Pepsi wrapped Times Square (“S”) shuttle Train.

In addition to NYC-based out-of-home advertising, Pepsi will have a newly constructed Pepsi sculpture just less than 40 feet long that will greet fans as they enter the Pepsi gate at MetLife Stadium.

All of the on-site activations in New York invite fans to celebrate and experience halftime to the fullest and also bring the brand’s Live For Now mindset and positioning to life.

PepsiCo’s relationship with the NFL is among the company’s longest running and most successful sports sponsorship. The Super Bowl represents the culmination of a season-long NFL activation for PepsiCo and its brands, which include Pepsi, Doritos, Gatorade, Quaker and Sabra.

Pepsi Gets New York Hyped for Super Bowl XLVIII added by Newsroom on January 30, 2014
View all posts by Newsroom →