By Newsroom on September 19, 2013Comments Off on PepsiCo Official Launch Partner for iTunes Radio 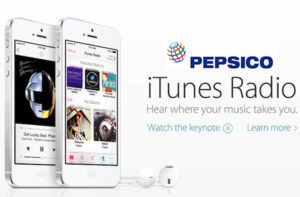 On iTunes Radio, PepsiCo will deliver custom experiences across PepsiCo brands, as well as branded channels within iTunes Radio, reaching millions of consumers on their iPhone, iPad, iPod touch, Apple TV, Mac or PC. These innovative experiences will be a vehicle to foster discovery of new global artists and highlight connections between music and other pillars of pop culture such as sports.

“As Apple continues as the leader of digital music and iTunes Radio instantly becomes a key player in the streaming music space, we view this relationship as an integral part of PepsiCo’s global strategy to provide fans with unique access to the world’s most iconic music artists, as well as a major stage for rising stars within our music portfolio.”

PepsiCo will have the only branded channels on iTunes Radio at launch and plans to integrate multiple food and beverage brands from its portfolio. Pepsi will be the first PepsiCo brand to debut with Pepsi “Pulse #Now.”  The channel features four stations dedicated to Pop, Country, Latin and Electronic Dance Music and will be promoted on iTunesRadio.com/pepsi. Additional brand channels will follow later this year, enabling PepsiCo to drive fan engagement with artists and musical genres across its global brands.

In addition, PepsiCo supports emerging artists around the world through partnerships with record labels, award shows and trade organizations such as the Grammy Awards and the Country Music Association, as well as televised competitions such as The X Factor, Arab Idol and The Voice China. The Pepsi Super Bowl Halftime Show is the most-watched musical event of the year.

More than 110.5 million viewers in the U.S. tuned in to last year’s show featuring Beyonce. Earlier this month, Pepsi and the NFL announced Bruno Mars as the headliner of the Pepsi Super Bowl XLVIII Super Bowl Halftime Show.

While iTunes Radio at launch is available only in the U.S., PepsiCo will have significant added global reach through iAd’s App Network, which will run ads across multiple territories in the world.