By Newsroom on February 9, 2016Comments Off on Piper-Heidsieck Unveils Limited Edition Bottle Exclusively For The Oscars

Piper-Heidsieck, the revered French Champagne house known worldwide for the red of its label and the gold of its wine, unveiled today the “Red Carpet Ready” limited edition magnum bottle that will be poured exclusively at the 88th Oscars ceremony and Governors Ball, the Academy’s official post-Oscars celebration. 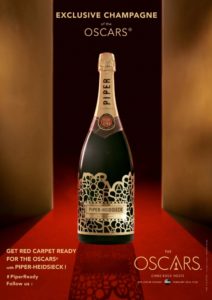 With only 1000 bottles produced, the special limited edition magnum was unveiled today during the Oscars Nominee Luncheon in order to give nominees a ‘sneak peek’ of what they will be drinking on February 28th. An exceptional bottle for an exceptional night, the Piper-Heidsieck Cuvee Brut magnum was designed by the 230 year-old French House specifically for the occasion with the word “Oscars” and the number “88” forming a golden “tiara” wrapped by hand around each bottle. Piper-Heidsieck believes that nothing less than a magnum is worthy of the grandeur of Oscars night.

“We are thrilled to celebrate a momentous occasion with a momentous bottle, one that reflects the Academy and the House’s shared value of excellence,” says Benoit Collard, Global Executive Director Piper-Heidsieck. “These magnums are as grand and bold as the films and performances we are celebrating this year.” 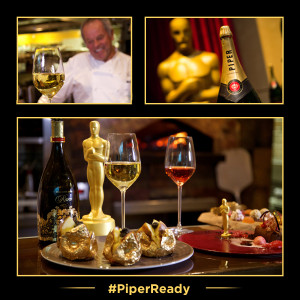 The Piper-Heidsieck “Red Carpet Ready” Limited Edition magnum bottle can be seen above walking the red carpet. As one of the evening’s “best dressed,” the bottle is met with flashing cameras as it steps out of the car and shows off its “robe” and adornments made especially for this big night, before walking onto the Dolby Theatre stage. The visual and video are part of the House’s overall #PiperReady Oscars campaign.

Piper-Heidsieck Unveils Limited Edition Bottle Exclusively For The Oscars added by Newsroom on February 9, 2016
View all posts by Newsroom →