Post Foods launched a friendly competition between Fruity Pebbles and Cocoa Pebbles to see which cereal is most popular among fans. Online and mobile competitions from January through September 2014 will rally support for each flavor. 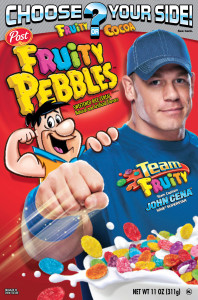 In 2014, Pebbles will ask fans of all ages to choose a side – are you on Team Fruity or Team Cocoa? Fans can declare their love for their favorite Pebbles flavor by visiting a microsite and downloading an interactive app encouraging fans to vote, take photos, and play minigames.

They will be asked to complete simple challenges such as making team spirit items like pennants out of Pebbles boxes, and sharing them through Instagram using their team’s hashtag (#TeamFruity or #TeamCocoa). Fans who complete these online missions and choose a side will be able to win prizes like giftcards, iPads, or John Cena and Kyrie Irving signed merchandise.

“Our 2014 campaign builds upon the genuine love that our fans have for Pebbles cereal,” said Sharon Pupel, Marketing Director at Post Foods, LLC.

“We are enlisting celebrities, sports stars, musicians and regular kids to share with us their love for Pebbles, and we’re starting with WWE Superstar John Cena and basketball all-star Kyrie Irving. With the help of our team captains, kids will be able to show their team spirit and earn fun prizes along the way.”

In addition to adding famous team captains to the Pebbles roster, the brand is expanding its social media presence beyond Facebook to Twitter and Instagram. In their roles as team captains, John Cena and Kyrie Irving will announce new missions digitally and interact with fans online. 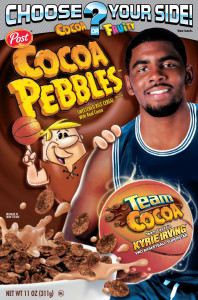 When Pebbles fans choose a side, they will also be supporting their team captain’s nonprofit organization. Cena, Team Fruity members and WWE, will be raising awareness for Hire Heroes USA, an organization dedicated to creating job opportunities for US military veterans and their spouses through personalized employment training and corporate engagement.

“It’s truly an honor to add ‘team captain’ for Fruity Pebbles to my resume and support Hire Heroes USA while doing so,” said WWE Superstar John Cena. “Kyrie is a tough competitor on the court, but let’s see how he does in this competition. He better be ready for Team Fruity.”

Team Cocoa members will be helping Kyrie reach out to middle schools, high schools and the larger community to help educate people about the unique skills and needs of people with intellectual and developmental disabilities through the nonprofit, Best Buddies.

“I’ve loved Cocoa Pebbles since I was a kid, and am thrilled to have the opportunity to lead this team off the basketball court,” said 2011 Rookie of the Year Kyrie Irving. “As the team captain for Cocoa Pebbles, I hope to take our fans to the championship and show John Cena and Team Fruity which team really rocks.”