By Newsroom on August 25, 2016Comments Off on Pret Cooks up a Viral Video with Rising Star Food Channel BOSH!

Without question point-of-view food videos are the fastest growing trend in social media, and only 8 weeks after launch new channel BOSH! has nailed the ‘magic-hands’ formula to earn 50 million video views, quarter of a million subscribers and its first brand partnership, with Pret A Manger.

BOSH! is a how-to-cook channel which creates exciting food and drink recipes which are all plant-based in nature. They show how to make novel dishes like mezze cake, guacamole onion rings or the super-viral watermelon jagerbomb punch, which boasts over 16 million views, 117,000 shares, 38,000 likes and 45,000 comments. 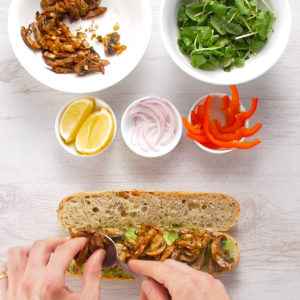 Their videos follow the new ‘magic-hands’ style (like Twisted Food or Buzzfeed’s Tasty), showing hands creating a dish in under sixty seconds, and average two million views per video.

Pret A Manger approached BOSH! to work together on the launch of their new vegan Asian Mushroom and Avo Baguette. They wanted to raise awareness of their new Chef’s Special whilst also testing the idea of showing customers how to make their recipes themselves.

BOSH! re-created the dish on camera, creating a 45-second POV video. They first created the mushrooms by marinating and baking them in a homemade Hawaiian ‘Poke’ dressing. They then created and dressed the sandwich with avocado and salad and voilà – ready to eat. The Pret video contained only subtle branding (a Pret Green Juice in the final shot).

The video launched on Facebook on Monday 1st August achieved 1m views within 48 hours. It was shared across both BOSH! and Pret’s social channels, and was picked up and shared by giant Facebook channels such as Food Envy, OMG Facts and Get In My Belly, fuelling viral growth. 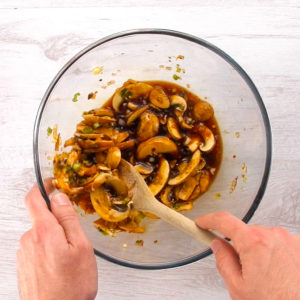 This approach to content creation and distribution is central to the BOSH! strategy, and explains why, only 8 weeks after launch, they average 1.3m views per video (more than social food sensations Jamie Oliver or Joe Wicks).

Anthony Leung, Social Media Manager at Pret said, “We first met Henry and Ian from BOSH! at the launch of our veggie pop up in June. We got talking and soon realised that both brands had a shared purpose to show that healthy, plant-based food can be delicious enough to be enjoyed by anyone.

“Our Chefs have done some incredible work developing new and innovative meat-free recipes, which are lovingly prepared in our shop kitchens every day up and down the country.

“Seeing this recipe brought to life in video was a proud moment for the team, and we’ve been thrilled by the reception it has had from customers. Reaching the million views mark was a great moment, but seeing the video being shared between friends, and receiving so many fantastic, supportive comments has been just as exciting.” 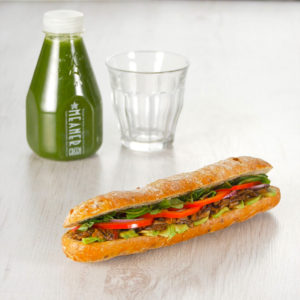 Henry Firth, Founder at BOSH!, added: “Being asked to help Pret with launching its new Chef’s Special was an iconic moment, and we wanted to create a campaign that the company had never done before. We are huge fans of Pret’s efforts in promoting sustainable food and we wanted to help them reach as large an audience as possible to announce their new product.”

“Trying to make a viral video out of a baguette was a challenge, but one which we relished – pardon the pun. We helped Pret raise awareness of their new dish as well as truly giving their audiences something of value, a chance to engage with the brand from their own kitchens. Working with a video partner is a new approach for Pret and it also gave back something to their loyal customers.”

“Our secret ingredient? BOSH! creates POV videos which make the viewer feel like theyare cooking the dish. Creating a how-to piece of content (rather than an advert) ensures the video resonates with the viewer, striking an emotion and making a view, comment or share much more likely. Any branding is purposefully kept subtle. People don’t share adverts.”

Pret Cooks up a Viral Video with Rising Star Food Channel BOSH! added by Newsroom on August 25, 2016
View all posts by Newsroom →