By Newsroom on October 23, 2013Comments Off on Pringles Delivers New Twist With Limited Edition Seasonal Flavors 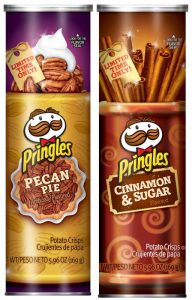 When it comes to holiday traditions, everyone has their favorites – from Thanksgiving football to ugly sweater parties or family desserts.

According to a recent survey commissioned by Pringles, Americans value listening to holiday tunes, taking family holiday photos and caroling most, with Black Friday shopping being their least favorite tradition.

This season, Pringles is inviting everyone to add some spice to their holiday traditions with two limited edition flavors: Pecan Pie and Cinnamon & Sugar, available nationwide in early November, just in time for the holiday season.

Following the success of the 2012 limited edition holiday flavors, Pringles is bringing back the Cinnamon & Sugar variety and introducing new Pecan Pie. A deliciously fun addition to any holiday occasion, Pringles is again giving party-goers the chance to share a tasty new potato crisp experience with their family and friends this season.

“Our survey found that for 48 percent of respondents, bringing pecan pie to a holiday party would make them a hero, so we’re excited to give them a convenient and delicious way to enjoy the seasonal flavor without worrying about the baking,” said Teresa Lindsey-Houston, Pringles Marketing Director. “For the six percent of Americans who chose fruit cake, we suggest you give our Cinnamon & Sugar or Pecan Pie Pringles a try – we’d be shocked if you didn’t switch things up at your next holiday party!”

The survey also found that when it comes to the holidays, earning the title of “best cook/baker” is more important than giving the best gifts, throwing the best party, having the best decorations or keeping the most snow-free driveway on the block. In fact, nearly a third of respondents said they would rather be known as the worst gift-giver, sloppiest holiday party guest or last-minute shopper than be considered a bad cook/baker.

Other findings from the Pringles survey include:

Pringles holiday flavors will bring some added cheer to holiday occasions of all shapes and sizes in 2013.