Reese’s Turns Criticisms About Its Christmas Candy Into Amusing Ads

By Newsroom on December 15, 2015Comments Off on Reese’s Turns Criticisms About Its Christmas Candy Into Amusing Ads 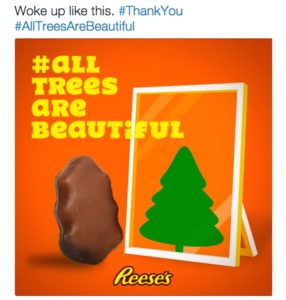 Reese’s shows us how it’s done in its latest ads that transform public outcry over its hideous Christmas candy into amusing visuals about tree-shaming.

Reminiscent of the Starbucks Christmas cup debacle, fans of the brand took to Twitter to voice their disdain about Reese’s tree-shaped peanut butter candies looking more fecal than festive.

The brand made no efforts to remedy their shoddily shaped sweets and instead went on to produce this series of ads announcing ‘#AllTreesAreBeautiful’.

Clearly Reese’s isn’t too bothered by the aesthetics of its tree-shaped candy. After all, “it’s not what it looks like, it’s what it tastes like”, and the brand knows it’s got you hooked on its peanut butter goodness.

REESE’S celebrates trees of all shapes and sizes. It’s not what it looks like, it’s what it tastes like. pic.twitter.com/8KURar00UX

Reese’s Turns Criticisms About Its Christmas Candy Into Amusing Ads added by Newsroom on December 15, 2015
View all posts by Newsroom →