Premium Swedish brand Rekorderlig Cider has brought its Beautifully Swedish credentials to life with the launch of its first ever global brand campaign by creative agency Saatchi & Saatchi, London.

Entitled Silver Skaters, Rekorderlig has taken a bold and pioneering approach by launching a TV creative through a multi-layered social campaign.

The ad features a pair of unlikely bearded skaters, named ‘Henrik & Anders’ after the founders of Rekorderlig. Set to a powerful and atmospheric soundtrack, they traverse a vast expanse of the beautiful Torneträsk Lake with surprising grace and poise, while their evangelical coach ‘Jarmo’ watches on.

The innovative campaign encompasses a 60″ film, a 30″ cut down, and 12 additional edits as part of the campaign that will cascade through Facebook and Instagram. Directly targeting its demographic of contemporary 18-34 year olds who live on social, these channels have been chosen to deliver maximum impact and cut through.

Nikki Langford, marketing manager for Chilli Marketing the agency responsible for Rekorderlig’s global marketing commented: “In true Rekorderlig style, we’ve been bold enough to deliver a breathtaking creative and invest this primarily into social. We believe that our core audience is more likely to engage with the brand and our amazing content in this space.”

Working with London based advertising agency Saatchi & Saatchi, the creative utilised 128 cast and crew, with temperatures plummeting to -42 oc on set.

The all-star team behind the cameras included the choreography crew from hit comedy Blades of Glory, legendary stylist Mr Gammon, creative director Adam Chiappe and Sarah Weatherburn, famed for being the creator of the wigs for the Harry Potter films.

The quirky and quintessentially Swedish Silver Skaters ad was directed by the award winning director from Sweden, Andreas Nilsson, probably best known for his contributions to the music videos of 2 Chainz, The Knife, MGMT and Goldfrapp and directing the Jean Claude Van Damme Volvo advert. The ad aims to capture the essence of Scandinavian style as part of the brand’s “Beautifully Swedish” positioning.

Nilsson said: “I have a pride for my homeland that has been reinvigorated by this project, especially when I learned how aspirational it is to be Swedish around the world.” 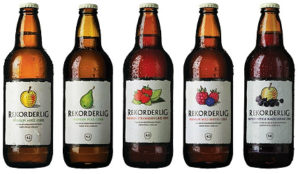 Jon Henrik’s traditional Swedish folk track ‘The Reindeer Herder’s Joik’ has been edited to create the eerily beautiful soundtrack. The creative ends with a shot of Rekorderlig’s ‘perfect serve’ ultimately linking the stunning skating sequence with the product.

Langford added: “The vivid blue skies and the frozen lake reinforce a crisp refreshing feeling and while their routine is clearly unconventional, it’s undeniably ‘Beautifully Swedish’ and has a touch of quirky humour that Scandinavians are famous for.”

Kieron Barton, managing director of Chilli Marketing said: “For us the cider category has become a little predictable on TV and we felt it needed something to invigorate it. Saatchi’s intuitively felt this communication should feel utterly ‘Beautifully Swedish’. This shifts the focus from a somewhat staid approach for cider brands with apples and pears falling from trees, to a much more emotional one. The end result is an epic sensory overload with a soundtrack that is both haunting and euphoric. The whole thing leaves you wanting more. We believe it will live long in the memory and think that consumers will come away from viewing this knowing that Rekorderlig Cider truly is ‘Beautifully Swedish’.”