By Newsroom on November 4, 2015Comments Off on Santa Maria Secures New Listings In Sainsbury’s & Morrisons 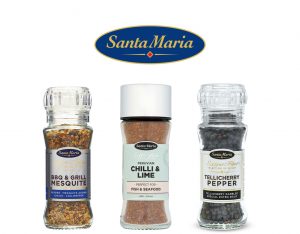 World seasoning experts Santa Maria has secured two new listings for their herbs and spices range in Sainsbury’s and Morrisons, further to its Tesco relaunch in May 2015.

Santa Maria’s team of taste developers are the skills and expertise behind the product range. Rolling out from early November, the launch will be supported by instore, digital and PR activity.

Discovery Foods rebranded under the name of Santa Maria in 2014. It is owned by Finnish parent company, the Paulig Group, which is a long-term a market leader in the Nordic region and active in over 22 markets across Europe.