By Newsroom on December 14, 2017Comments Off on Santa Meets Smartphones in Coca-Cola’s Charming Christmas Tale

This Christmas, Coca-Cola invites you to recognise those who make the season possible, enjoying magical moments together. A campaign created by Pereira & O’Dell in San Francisco has launched globally with a message that inspires people to give thanks to those who make this season special. 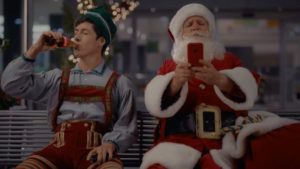 The campaign is supported with a short film, ‘A Magic Thank You’, directed by Oscar-nominated Theodore Melfi (Hidden Figures). The social-driven tale stars Scott, a mall elf who overstates his Christmas enthusiasm while trying to impress a girl. The conundrum leads to a chance encounter with Santa and a rideshare driver who work together to save Christmas in this modern twist on a classic tale. Melfi, a self-proclaimed Christmas fanatic, embraced the formidable task of telling a story that reminds us to be thankful and charitable. 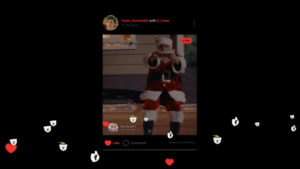 The film will be running globally in-cinema and on digital and social platforms and supported by above the line elements including Facebook effects that create interactive video masks as Santa or Coca-Cola’s iconic Polar Bears. Coca-Cola is one of the first global brands to partner with Facebook to launch branded effects.

The all-encompassing message of the 2017 builds on the 2016 campaign that gives a sincere message of gratitude to all those who make an extra effort to prepare delicious dinners, travel to visit their families, decorate Christmas trees or make last minute purchases.

“Getting the chance to work on this campaign was a joy and a chance to remind myself what makes Christmas so special: sharing kindness, love, and the spirit of good will with everyone we come in contact with. And Coke is the perfect way to express the feeling of Christmas,” said Melfi. 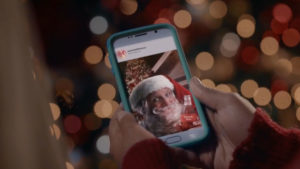 The beloved brand has a storied history working with prominent filmmakers at Christmas time. In 2013, Coca-Cola worked with Ridley Scott and John Stevenson to re-introduce the brand’s polar bears.

PJ Pereira, Chief Creative Officer of Pereira & O’Dell, says of the campaign: “The biggest challenge marketers face in today’s on-demand world is finding stories that will be worth the money they invest and also the time consumers will spend. This story was done with the marketing discipline only Coca-Cola can use and the storytelling sensibility of one of our best film makers to make sure it works well for everyone.”