By Newsroom on August 8, 2017Comments Off on ScS Survey Reveals the UK Consumes 1.7 Billion Takeaways a Year

A study of Britain’s takeaway food favourites has revealed that Brits eat their way through 1.7 billion takeaways each year – that’s 32 million takeaways ordered each week!

Furniture and flooring specialists ScS, surveyed 1,600 people to find out about their takeaway habits, and found that the average Brit will order 1,766 takeaways in their lifetime.

The research also found that more than half (54%) of Brits choose to enjoy their takeaways sat on the sofa with their families, however men are most likely to order when they’re alone compared to women who tend to consider it more of a treat. 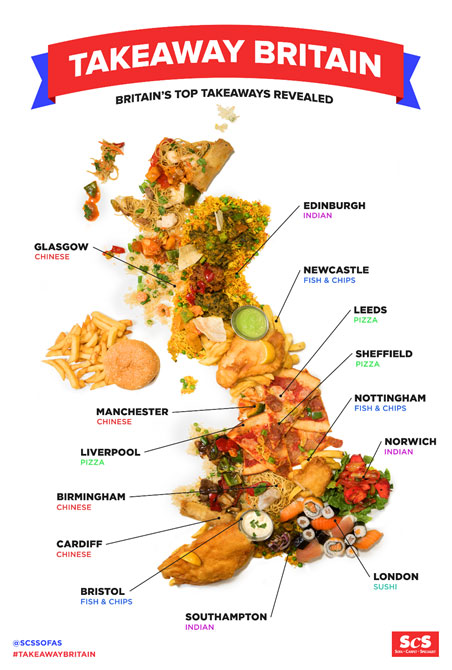 Nationally, Chinese food was named the favourite takeaway cuisine, however pensioners stuck to tradition, with two out of three aged 65 or over favouring time-honoured fish and chips. And, it’s not just unhealthy choices being favoured, with sushi coming out top in the capital.

Looking at how often Brits reach for the menus, half of those surveyed admitted they get a takeaway at least once a week, with those aged 25 to 34 twice as likely as anyone else to order take-out every day.

London has been named as Britain’s takeaway capital, with 38% of Londoners claiming to order takeaway at least twice a week, and admitting they’re not picky about who they eat with; whether that’s with their partner (37%), with family (28%), on their own (23%), or with friends (12%).

At the other end of the scale, those living in the South West of England are least likely to order regularly, with 27% ordering less than once a month.

Lindsey Duncton, Marketing Manager at ScS, said: “Nothing beats curling up on the sofa with your favourite food. So it’s no surprise our survey revealed we’re a nation of takeaway food lovers, who enjoy nothing more than an evening in on the sofa with our family favourite take-out. However what’s really interesting is how our menu choices and foodie habits differ from city to city, and that takeaway doesn’t always have to mean unhealthy. There’s so much more choice available these days and take-out is ever more accessible, meaning dining in with your favourite can be just as much of a treat as dining out.”

ScS Survey Reveals the UK Consumes 1.7 Billion Takeaways a Year added by Newsroom on August 8, 2017
View all posts by Newsroom →