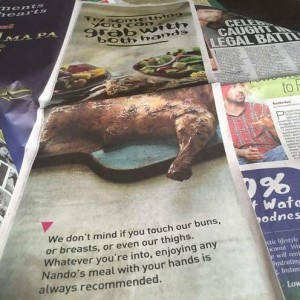 Nando’s India has become embroiled in controversy after the global chicken restaurant chain published a sexist advert in the Hindustan Times inviting customers to ‘touch our buns, breasts and thighs’.

The insensitive promotion started badly by equating women to pieces of meat ‘Try something that shows off a bit of skin’ but then managed to get even worse by stating: “We don’t mind if you touch our buns, or breasts or even our thighs. Whatever you’re into, enjoying any Nando’s meal with your hands is always recommended.”

Aghast readers subsequently took to social media to express their anger at the ‘disgusting, disturbing and disappointing’ piece.

Dear #Nando‘s is your food so inedible that you have to rely on lines from a bad C grade movie to sell it? pic.twitter.com/q4eoXRJt1V

Adding to the outrage India has been hit by a series of rape scandals as the country seeks to shed its image as a patriarchal society beset by sexism.

In an effort at damage limitation Nando’s India subsequently tweeted an apology, stating: “We sincerely apologise for any offense caused by our ad published today. Our intent was not to offend anyone. We promise to do better.”

We sincerely apologise for any offense caused by our ad published today. Our intent was not to offend anyone. We promise to do better.