By Newsroom on January 28, 2016Comments Off on Shock Top Set to Make Super Bowl Debut with Ad Featuring TJ Miller

Shock Top, the beer brand dedicated to living life unfiltered, is going all in on a once in a lifetime opportunity — a spot at Super Bowl 50 — and ready to score big with millions of Americans.

To bring this home, Shock Top has teamed up with comedian and actor T.J. Miller to deliver unfiltered experiences to beer lovers around the nation starting with the Big Game and continuing throughout 2016. Shock Top’s spot titled “Unfiltered Talk” released on January 28, featuring Shock Top’s spokes-orange Wedgehead sharing a pint and some straight talk with T.J. Miller in one of America’s most flavorful bars. The spot will kick off the brand’s Live Life Unfiltered campaign with the Big Game creating the perfect launch pad for a brand poised to become a household favourite this year. 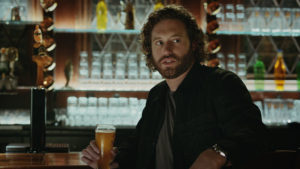 “Shock Top is all about living life unfiltered, embracing real talk and experiences without pretension or labels, an attitude we think comes across loud and clear in our Big Game spot,” said Jake Kirsch, Vice President of Shock Top. “Shock Top is primed to have a killer year, a big time breakthrough that starts with the Big Game but will continue all year long. It’s the first time Anheuser-Busch has made this type of investment in a beer that isn’t a lager, giving us a chance to introduce ourselves to millions as we work to become the number one wheat beer in America.”

Shock Top’s relationship with T.J. is well timed, as the comedian’s career is exploding thanks in part to his popular roles on HBO’s Silicon Valley, upcoming movie Deadpool and a recent hosting gig with the 2016 Critic’s Choice Awards.

T.J. will also take part in other Shock Top “Live Life Unfiltered” campaign moments throughout 2016, ranging from digital content to in-person appearances at soon to be announced events across the US.