By Newsroom on May 24, 2016Comments Off on Snickers & 7-Eleven Team up for Interactive ‘Hungerithm’ Twitter Push 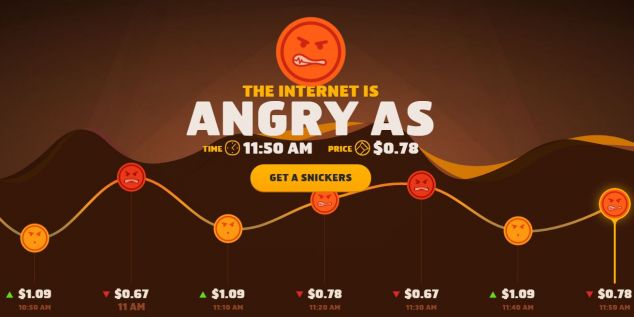 Snickers has teamed up with 7-Eleven for an interactive campaign which sees prices of the brand’s flagship chocolate bar lower when the internet gets angry.

Literally feeding on the rage of Twitter users, the confectionery maker has teamed up with the Melbourne Institute of Technology to create the ‘Hungerithm’ algorithm; which tracks the mood of online commentators and changes the price of a Snickers accordingly.

The website coincides with the brand’s wider, ‘You’re Not You When You’re Hungry’ campaign.

Monitoring negative sentiment on Twitter, the website scans 100,000 social posts a week and updates the price 144 times daily. The crabbier the internet gets, the cheaper a Snickers will be at any Australian 7/11 store. The cost can be slashed by as much as 80 per cent.

The Hungerithm pin points moments of fury, and displays tweets from disgruntled users to showcase the general mood online. Users can redeem their sweet treat using a special barcode generated for mobile via the website.

Snickers & 7-Eleven Team up for Interactive ‘Hungerithm’ Twitter Push added by Newsroom on May 24, 2016
View all posts by Newsroom →