By Newsroom on March 8, 2018Comments Off on Society Malaysia and Universal McCann Introduce the New Face of KFC – Claudia Sanders

Society Malaysia and media agency Universal McCann (UM) have devised a unique campaign with KFC to commemorate 2018’s International Women’s Day. Across various platforms and social media, instead of the well-known and beloved Colonel Sanders, the face of the day for KFC is Claudia Sanders. 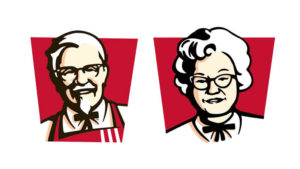 KFC Malaysia recognises that their people are the key of its continued success and this includes the women behind their counters and all around the organisation. For this year’s International Women’s Day, the team at Society and UM decided to bring to life Claudia Sanders, the lesser known woman behind KFC, to recognise her contribution to the well-loved brand.

Stanley Clement, Managing Director of Society said, “KFC as a brand takes a proactive stance in celebrating women who are today’s role models, guardians, providers, nurturers, leaders, inventors, mentor, supporters and more. The team was looking at ways to support this, and discovered the story of Claudia Sanders, the wife of Colonel Sanders. David Novak, then KFC’s president and Chief Executive, once said: “We could not have been the company we are now without Claudia’s contributions.” This was the catalyst for the campaign.” 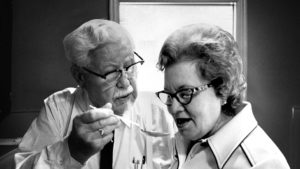 Rina Low, Vice-President of UM commented, “From stumbling upon this great insight and story of the woman behind Colonel Sanders, the team quickly conceived a truly integrated campaign that spans digital, print and on-ground activation. This includes a logo takeover in the form of Mrs. Sanders both online and offline.”

The campaign runs for a day, with the digital campaign extending to encourage Malaysians to share an Instagram photo or stories of women who have made a difference in their lives using the hashtag #KFCIWD.

Simultaneously, the campaign highlights three inspirational stories of KFC staff who, in spite of challenges, disabilities or family struggles, have been successful in their own right, and essential pillars within the KFC network.

Merrill Pereyra, Chief Executive Officer – Restaurant Division of QSR Brands said, “57% of people working for KFC Malaysia are women. We recognise that a diverse workforce is good for the business. Women are committed; they possess a unique flair and finesse. It is a fact that they, too, play extraordinary roles for the business.”

International Women’s Day takes place globally on the 8th of March to celebrate the social, economic, cultural and political achievements of women. The day also marks a call to action for accelerating gender parity.

Pereyra adds, “To all women of KFC and the world out there, we would like to say that your future is always bright, equal, safe and rewarding. Keep inspiring us and impacting lives, and thank you for all your hard work and contribution to our community, family and this organisation.”

The campaign includes an outreach by KFC to provide support to two single mothers in Segambut and Cheras, joined by Merrill Pereyra. His message to Malaysians, documented in a short video, emphasised the important role played by Mrs. Sanders, without whom, we might not have had KFC as we know it today.

Stanley adds, “Claudia Sanders played a part in driving the man who shaped KFC’s future. The name of Colonel Sanders lives in history, as she helped to memorialise him through her dedication behind the scenes. This recognition of Claudia is also dedicated to numerous other successful individuals in our industry and beyond, who are backbones of major organisations and driving positive change. This inspiring story is something many women and Malaysians can relate to, and it gives us pride in working on the KFC business.”

Society Malaysia and Universal McCann Introduce the New Face of KFC – Claudia Sanders added by Newsroom on March 8, 2018
View all posts by Newsroom →