By Newsroom on February 14, 2013Comments Off on Somersby: Fastest-Growing Of The Global Top 10 Cider Brands In 2012 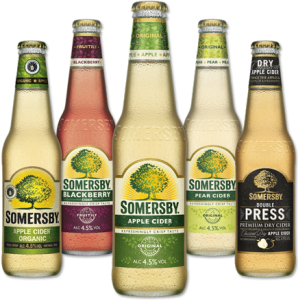 Since the launch of its first bottle of Somersby Apple Cider in Denmark in March 2008, Carlsberg Group’s cider brand has gone from strength to strength.

Over the past four years, Somersby has been rolled out across much of continental Europe and in 2012 alone, Somersby was introduced into 15 new territories, including Asia; almost doubled volume growth; and became the fastest growing international cider brand (source: Canadean).

As well as introducing new flavours, Carlsberg Group has been quick to respond to the needs of its consumers. In 2010, Somersby Organic Cider was first introduced in Sweden and two years later was launched in Finland and became the country’s first organic cider offering.

In 2012, Somersby Double Press, a classical dry apple cider, joined the portfolio, while the UK’s off-trade received Somersby as a mainstream cider brand for the first time in July 2012, with an on-trade launch planned for early 2013.

“With Somersby, we have managed to ride the cider wave by building a strong cider brand in a drinks category which has been growing at an average 4.8% over the past ten years.

“Not only have we been focused on driving the Somersby brand, but we have been listening to what our consumers want and acting accordingly.  Thanks to the extensive international marketing and distribution network of the Carlsberg Group, we have been able to get our Somersby products to new markets quickly and have supported these launches with a series of unique, distinctive campaigns.

“Somersby is a crisp, refreshing cider with no artificial sweeteners, flavours or colourings and is another example of Carlsberg’s unstinting commitment to both quality and innovation.”

Somersby: Fastest-Growing Of The Global Top 10 Cider Brands In 2012 added by Newsroom on February 14, 2013
View all posts by Newsroom →