By Newsroom on May 7, 2014Comments Off on Space Creates ‘Full Flavour Refreshment’ Campaign For Foster’s & Bulmers 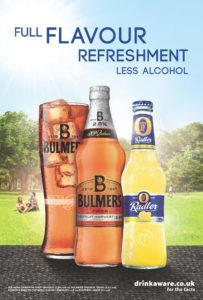 Space has been tasked with establishing Heineken’s foothold in the ‘moderation’ category through a shopper campaign focused on trial and awareness of Foster’s Radler and the launch of two new Bulmers variants of 2.8 per cent abv; Bulmers Cider Five Fruit Harvest and Bulmers Cider Indian Summer. Heineken claims the low alcohol category has the potential to grow to 5% of total cider and beer volumes in the UK within ten years.

The ‘Full Flavour Refreshment’ campaign promotes these ‘moderation’ variants as a solution for drinkers looking for outstanding refreshment and flavour but with lower alcohol content, to suit lower tempo drinking occasions.

Space is responsible for the overall concept and creative for the ‘Full Flavour Refreshment’ shopper campaign. It launches this month and runs until the end of May at major grocery multiples across the UK, including Sainsbury’s, Asda and Morrisons. Activity includes an outdoor push via six sheets outside retail spaces. The campaign translates in-store via a suite of POS items that hit all of the touch points on the shopper journey.

Sean Kelly, group account director, Space said: “It’s a privilege to be pioneering Heineken’s ‘lower alcohol’ category strategy. It was a challenging brief to communicate Foster’s Radler and Bulmers Cider together.  At Space we build brand intimacy, and see this work as the start of the relationship between the target audience and the category. We’ve done this by identifying and creating the right occasions for drinkers and shoppers alike to try these refreshing flavours this summer.”

Space Creates ‘Full Flavour Refreshment’ Campaign For Foster’s & Bulmers added by Newsroom on May 7, 2014
View all posts by Newsroom →