By Newsroom on January 12, 2016Comments Off on Sumo Star Takes a Trip to Scotland’s Strathisla Distiller

The campaign from Havas Worldwide sees Japanese ex-sumo star Takanohana Oyakata visit the Strathisla Distillery to meet Chivas’ Master Blender Colin Scott. As one of few sumo wrestlers in history to reach the highest rank of yokozuna, Takanohana Oyakata is a well-known and well-respected figure in Japan, while Colin has been described by Chivas as the “custodian” of the signature Chivas Regal style. Both men are renowned for working to preserve the traditions of their respective fields.

The shoot marked the perfect culmination of East meets West: an advertising campaign for a limited edition, Japanese-influenced Chivas whisky, shot in the spiritual home of Chivas and in a country with a great heritage of whisky and craftsmanship. The name Mizunara derives from Mizunara Oak, a type of wood used in the Japanese whisky industry that gives the whisky distinctive flavours of vanilla, honey, blossom and fresh fruit. 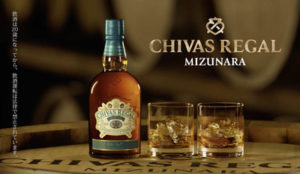 The LS Productions team was brought on board to produce the two-day production. Directed by Takayuki Niwa, the campaign was shot in October across two locations – a bar in Aberdeen and the distillery in Keith.

LS Productions’ locations department took charge of the search for two suitable locations, both of which threw up their own challenges. To find the perfect location for this shoot, the team turned to their knowledge of the Scottish whisky industry and their strong in-house location library. The producers’ experience of shooting in distilleries made using Strathisla possible, and their creative intuition helped them to find the perfect Scottish bar, with the right colour ways, tonality and textures for the Japanese market.

Amy Morement, Location Manager at LS Productions, explains: “Finding a bar that appealed to the Japanese whisky market was crucial. We completed a lot of research into how the culture of whisky here in Scotland translates. We used this research to inform our scout for the ideal bar and searched Aberdeenshire high and low for a location that was just right.”

Wendy Isaac, Producer at LS Productions, adds: “The second day of shooting was at Strathisla Distillery, where Mizunara whisky is made. Health and Safety is of paramount importance at Distilleries, especially with the potential for flammable liquids. Working closely with the staff we prepared all necessary plans weeks in advance so every department could comment and ultimately provide approval. Four members of crew undertook training before filming could even begin. With our working knowledge of the health and safety protocol and great relationships with staff, crew and client, we ensured the day ran smoothly.”

As well as the creative and locations, the LS Productions team were on hand to co-ordinate all production and logistics, crew and kit, and arrange accommodation and vehicles for the 28-strong crew and visiting clients from Havas Tokyo, Havas London and Pernod Ricard.

Sumo Star Takes a Trip to Scotland’s Strathisla Distiller added by Newsroom on January 12, 2016
View all posts by Newsroom →