By Newsroom on March 3, 2017Comments Off on This Filet-O-Fish Story from McDonald’s is a Load of Pollocks

When McDonald’s needed to find a creative way to tell a sustainability story about their Filet-O-Fish, they looked no further than Bernstein-Rein (BR) who responded with a humorous campaign that highlights the journey of creating this famous sandwich. 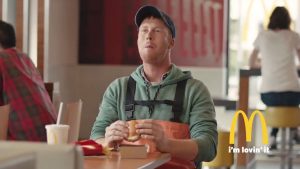 The agency went to land-locked Pollock, South Dakota to find a guy who didn’t know that Filet-O-Fish sandwiches were made from wild-caught Alaska Pollock. They found Davis, who conveniently, likes to fish. BR and McDonald’s took Davis from Pollock to Bismarck, ND to Kodiak, AK. They spent 16 hours aboard the Trident Seafood’s Viking Explorer, in the Gulf of Alaska. The journey of a lifetime for Davis, but just another day in the life of sustainable fisheries that supply McDonald’s with Pollock.

“We want our consumers to know where our food comes from and what is in it, so what could be better than showing them not only the fish for the Filet-O-Fish sandwich but also, the care involved to ensure a great-tasting, quality sandwich when they visit McDonald’s,” said Chef Dan Coudreaut, McDonald’s Vice President of Culinary Innovation.

The new campaign features .15 second and .30 second ads that will be supported in local McDonald’s across the US. The first ad aired on February 27th. BR has been a longtime McDonald’s agency providing national creative campaigns through its field activation program as well as local promotional campaigns for seven McDonald’s co-ops.

“We needed to find a way to tell the story of McDonald’s sustainably caught wild-caught Alaska Pollock. Lucky for us, Pollock, SD is about as far from an ocean as you can get in the United States which brought an entertaining element to the story,” explained Lara Wyckoff, Executive Creative Director at BR.

In addition to the television BR created radio, digital and social assets to support the campaign across channels, leveraging Davis and the story he’s telling through the TV spots.

This Filet-O-Fish Story from McDonald’s is a Load of Pollocks added by Newsroom on March 3, 2017
View all posts by Newsroom →