By Newsroom on January 27, 2014Comments Off on The Web Slams ‘Share A Coke’ Website For Anti-Gay Discrimination 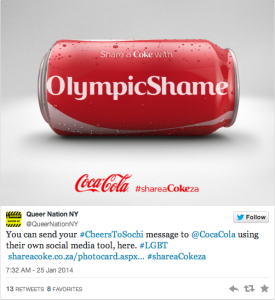 Many people have decided to express their anger at Coca-Cola’s sponsorship of the 2014 Winter Olympics, taking to the Share A Coke website to vandalize the blank labels that it generates.

Orginally created to enable people to share their personalized can of virtual Coke online, the website has become an avenue for political protest.

The ridicule is so severe that a label protesting against the discrimination of gays show up when the webpage loads. Other political causes have been highlighted on the site as well—take “Free Snowden” for example.

According to both the Huffington Post and Buzzfeed, the website does not allow users to type in the words “gay”, and “homo”, yet the words “straight”, and “hetero”, are allowed.

A lot of furor has been generated on social media, yet the company has not commented on this marketing campaign gone wrong.

View how these words have been censored in the video below.

The Web Slams ‘Share A Coke’ Website For Anti-Gay Discrimination added by Newsroom on January 27, 2014
View all posts by Newsroom →