By Newsroom on December 23, 2013Comments Off on Tostitos & Nelly Get Fans Amped Up For the 2014 Tostitos Fiesta Bowl 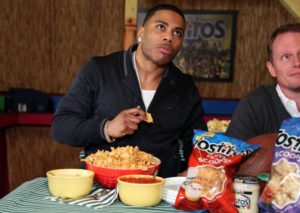 With the match-ups decided and excitement around college football surging, Tostitos – the brand known for making life a party – is getting the  2014 Fiesta Bowl festivities started early this year.

Together with hip hop music icon and former high school football standout Nelly, the Tostitos brand is sharing ultimate party must-haves to get fans amped up for game day.  The 2014 Tostitos Fiesta Bowl is set to air at 8:30 p.m. ET on New Year’s Day on ESPN.

Tostitos, one of the flagship brands from PepsiCo‘s Frito-Lay division, has been the title sponsor of the Fiesta Bowl – part of the Bowl Championship Series – for the past 19 years.

“Now we know who’s playin’ in the 2014 Tostitos Fiesta Bowl, it’s time to get ready to party,” said Nelly.  “A great game day party must have three key things, great beats, cool people and the right food, which for me is Tostitos tortilla chips and dips.”

Grammy Award-winning and multi-platinum hip hop recording artist and actor, Nelly, began his music career with St. Louis hip hop group the St. Lunatics in 1993 and was signed to Universal Records in 1999.

With a hit single “Where the Party At” and others, his music is known for creating the perfect party atmosphere.  This past April, Nelly released a remix of the country song “Cruise” with duo Florida Georgia Line, which became No. 1 on the charts and has sold more than 1.6 million copies.

As an actor, he held a breakthrough supporting role in the 2004 remake film “The Longest Yard” and is known to be an avid football fan, having played football in high school.

New Tostitos Products to Amp up Any Party

Made for dipping, Tostitos Fajita flavored Scoops! tortilla chips offer a spicy twist on the bite-sized bowl-shaped tortilla chip and deliver the great taste of red bell peppers baked right into the dough before cooking.

They pair perfectly with the new Tostitos Queso Blanco dip, which incorporates a creamy blend of Monterey jack and cheddar cheese along with bell peppers and jalapenos.

“Whether it’s at home or at the stadium, our new Fajita flavored Scoops! tortilla chips and Queso Blanco dip are perfect for spicing up bowl game tailgates and get-togethers,” said Christina Menendez, senior director of marketing, Frito-Lay North America.

“These delicious new snacks offer the perfect combination of flavor and fun, adding extra sizzle to the party experience.”

Tostitos & Nelly Get Fans Amped Up For the 2014 Tostitos Fiesta Bowl added by Newsroom on December 23, 2013
View all posts by Newsroom →